I've never been regarded as an athlete.

My youth is littered with a variety of physical forays - about seven years on the Harper's Harpoons swim team, about as many years playing soccer in Cincinnati, a few years of horseback riding (I prefer an English saddle to western).

I did tennis camp as a kid, gymnastics for a couple years. I was even on the track and field team in high school (shot put and discus).

My parents gave me plenty of opportunities to find athleticism. And while swimming is probably my favorite sport, I was never considered the neighborhood's next Janet Evans.

Some may mistake my lack of athletic prowess for laziness, but I would counter by saying it's more a lack of discipline, which is an entirely different thing. As an eight-year-old soccer fullback, I was more interested in the clover and dandelions growing in the field than I was the action near the goal.

Distractions do well to pull my focus away from the task at hand - both in athletics and life's other endeavors. It makes for an interesting challenge.

What can I say? I sometimes struggle with commitment. I know I am not alone in this challenge.

So when I started running in June, I timidly wondered when I'd hang up the shoes and focus my energies on yet another interest.

I waited six months to invest in decent running shoes, instead jogging in flimsy, well worn walking shoes I bought for a trip to Europe four years prior. I didn't want to make a financial commitment to something I was unsure would take.

But I knew something had to give. I'd returned from a trip to India a month earlier that gave me pause and opportunity to evaluate my life. Significant changes needed to be made. My life's health and happiness depended on it.

I analogized my body to a house. When you want to put a house on the market, you get it ready for potential buyers. You spruce it up. You make changes to boost its curb appeal. You do some staging.

I needed to get my body ready for market.

And while the running was a means to an end - I've lost over 30 pounds and counting - I had no idea how it would translate to other changes in my life.

The act of running has given me the gift of intentional meditation and thought. When I am on the road, I have time to ponder the challenges, tasks and opportunities facing my life.

It's the one time I have zero distraction, and that is worth all the money in the world.

And running has offered me some amazing physical challenges. In June, the thought of running for five minutes straight seemed like a daunting task.

Last weekend I proved to myself that I could run for more than two and a half hours straight.

I wept as I neared the finish line. My thoughts trailed off to the past seven months and the self doubt I harbored, the discipline I'd demonstrated, and the physical challenge I overcame.

I can do anything my heart and soul desire.

A week after my first half marathon, I'm thinking about the next two races on my list. I'm running a half marathon in Lexington at the end of March, and I also intend on running Cincinnati's Flying Pig half marathon.

Beyond that, I imagine there will be plenty more challenges. I'm already mulling a trip to China in May 2013 to run a half marathon on the Great Wall.

Running With A Camera

So, I ran a half marathon this weekend.

I have lots to tell you about this experience (starting with my training in June, to my emotional finish on Sunday), but in the meantime, I'll let these videos do the talking.

What can I say? I've always had a problem with oversharing.

Kate's Random Musings by Kate the Great is licensed under a Creative Commons Attribution-Noncommercial-No Derivative Works 3.0 United States License.
at 7:38:00 AM 1 comment:

A guy says he caught Depp in drag... at a UK basketball game.

Now, a lot of people will jump through any number of hoops to see the Kentucky Wildcats play. The team is ranked #2 in the nation and tickets sometimes go for hundreds of dollars.

Kentucky-born Johnny Depp can afford any ticket he'd like, but he does strike me as the type that would like to avoid all the hoopla Ashley Judd experiences when she shows up to cheer on the Boys in Blue.

What's your take? Is this Johnny Depp in drag... holding hands with a bodyguard?

My only question... if he really is in disguise, do you think he'd be dumb enough to walk into CBS's camera shot of an interview with Coach Cal?

Pret-a-porter isn't nearly as glamorous as it sounds.

Foreign words make the phrase sound luxurious, but Francophiles and ace students in Madame Hodge's French II class at Daniel Hand High School know it means ready-to-wear. As in Off The Rack.

As in, clothing for a cast of thousands.

The really fancy schmancy side of fashion involves clothing that is cut to order. Bespoke. As if it had a label inside with your name embroidered in gilded thread.

Bespoke, the word, hearkens back to the 1700s, when tailors made clothing for wealthy people with fabric that was spoken for because it was already on hand.

Bespoke clothing is exactly what you get when you meet with Lindsey Lusignolo. 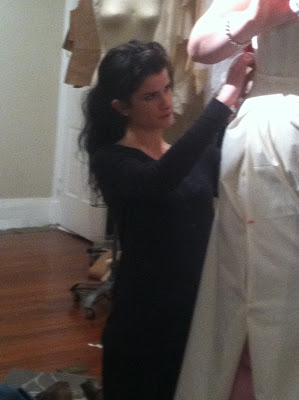 Last month, I told you about the ball gown Lindsey is designing for me for the Junior League of Cincinnati's CinSation fundraiser.

The process started in November. Lindsey and I met to talk about concepts and colors. The theme for the gala is the 007-flavored "Shaken, Not Stirred," and considering I've lost over 30 pounds, I decided I'd rely on Lindsey's talents to make me one of the hottest Bond Girls ever.

In early December, Lindsey showed me sketches with different dress features that I could select for my custom gown.

We followed up right after Christmas to go over the initial muslin designs. 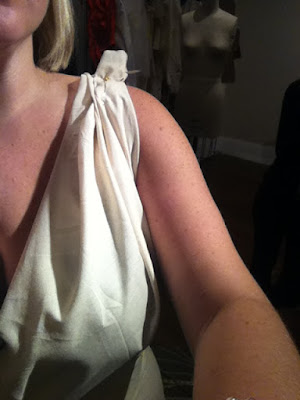 It looks a bit like a fancy toga, but the fabric is a great way of visualizing the design before Lusignolo and her team begin stitching silk.

The Over-the-Rhine fashion designer and I decided on a few points: the dress would be a long gown to emphasize the glamour and drama of James Bond and Hollywood.

And the dress would emphasize my dramatic and curvaceous cleavage (ed note: I think I actually said, "I want to highlight my rack. I have a great rack." No need for modesty, eh?) 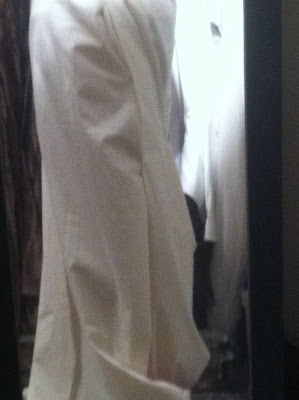 We've decided on a few other eye-catching features that will make this gown fit for Ursula Andress.

Now, all I need to find is a hot BRG-colored two-seater.

The Junior League of Cincinnati's CinSation gala is one of the organization's largest, annual fundraisers. The evening helps supports the JLC's mission of training women for leadership opportunities and building better communities in Greater Cincinnati. Full disclosure: I'm on the JLC's Board of Directors.

Lindsey Lusignolo Studio is at 1329 Main Street in Over-the-Rhine, Cincinnati. A DAAP graduate, the designer specializes in couture gowns and formal wear, but she is also available to do alterations and can hem or take in/let out your favorite pieces.

Kate's Random Musings by Kate the Great is licensed under a Creative Commons Attribution-Noncommercial-No Derivative Works 3.0 United States License.
at 1:05:00 PM No comments: