Something To Look Forward To

We all need a golden carrot from time to time.

Travel tends to be my golden carrot - the thing that hangs off in the distance, a rich experience that is just sweet enough to convince me to plod along with head down and heavy yoke.

I know I am not alone in this perspective.

The past month has been quite serendipitous; the weekend after I lost my job I jetted off to Southern California with one of my dearest friends. The trip was just what the doctor ordered - R&R, sunshine, and poolside beverage service.

It was better than any medicine.

Two weeks later I hopped back on a plane to head south to Atlanta to see my two Georgia peaches. Nora and Liam, my niece and nephew, celebrate birthdays during the same week in August. A Four-and-two joint birthday party beckoned, complete with a wild and woolly petting zoo and pony rides in the cul-de-sac.

Again, a perfect respite to wash away my worries. Nora and I talked about my globetrotting adventures (aside: I had no idea four-year-olds can hold their own with critical questioning and curiosity aplenty) and Liam was reminded why he often says, "Kay Kay fun." He's typically the strong, silent type but has the stunning looks to go with it. 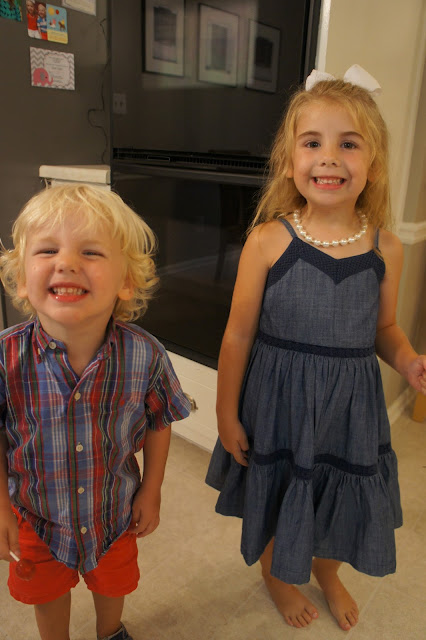 One looks like me, and the other has some of my sassy traits...


This coming weekend gives rise to more travel. Scott and I are hitting the road with our sights set on Pittsburgh.

Well more different than our last trek to Dubai and Bangkok, I'm excited for another opportunity to get out of dodge and dwell on the distraction of travel.

I've gathered a short list of things to explore in Pittsburgh - the Warhol museum, the Mattress Factory Art Museum (thank you for the suggestion, Margy Waller!), the Frick Art and Historical Center, the Duquesne incline and Primanti Bros.

Ever the planner, the time I spend researching a trip is sometimes a greater distraction than the adventure itself. It gives me something to look forward to, something to lose myself in, something to focus on that's positive.

And sometimes that's all we need to keep going - a distraction from what's distracting us.

Kate's Random Musings by Kate the Great is licensed under a Creative Commons Attribution-Noncommercial-No Derivative Works 3.0 United States License.
at 10:48:00 AM 1 comment:

Fake It Until You Make It

Looks can sometimes be deceiving.

The executive who looks like she stepped out of a fashion catalog. The actor crossing a stage with swag and confidence. The volunteer running a boardroom meeting like a boss.

Sometimes there's well more working behind the scenes, but in many cases, these people have learned the carefully crafted art of perception.

The day after I lost my job, my parents both tag-teamed a phone call intended to pump me up with vim and vinegar. My dad, a retired marketing executive himself, detailed a litany of skills that make me valuable to my next employer. My mother, while she has no official PR or marketing experience of her own, offered what could be one of the most valuable points I've heard in recent weeks:

"Don't leave the house unless you look like a million bucks."

She went on to offer that my hair should be perfectly coiffed, my makeup well applied. I should forgo the yoga pants-and-tank tops uniform for a wardrobe that implies my professional stature.

I initially dismissed it. What does it matter how I look? What a superficial premise, I quipped. But then my mother reasoned a valuable point about appearance. Whether we like it or not, our outward appearance speaks volumes about what's happening inside us.

And while inside I might vacillate between abject devastation and unwavering confidence, the world only needs to see me happy, optimistic and eager.

Make no mistake about it, I am excited about my future. This unexpected vacancy has made me available for unknown opportunities and rich experience.

And those unknown opportunities may not reveal themselves if I'm in a perpetual state of slovenly sweats and greasy hair.

I have taken my mother's advice to heart. That in itself is practically a miracle.

With the exception of my almost-religious morning exercise routine, I've made an effort to fix my hair and belabor the finer points of eye makeup. Call it trivial if you will, but there's something valuable about going through the paces of normalcy.

Months ago I changed the home screen of my iPhone to an old Elizabeth Taylor quote. The Hollywood grand dame once said, "Pour yourself a drink, put on some lipstick, and pull yourself together." There's something to be said about gathering your druthers to change your disposition.

Marketing is sometimes all smoke and mirrors. A company jockeys to appear larger or more successful than they really are. A professional spins yarns of thought leadership to develop a position of expertise.

Every company is working to change perceptions and cultivate new opportunities of success.

The same goes for regular folks.

We're each developing our personal brand, whether we want to admit it or not.

As much as we may protest, the photos we post on Facebook and the missives we Tweet can sometimes speak louder about our personal brand than a face-to-face interaction.

And so I am working to cultivate a personal brand that projects optimism, creativity, determination, adventure and curiosity.

I guess that rules out sweats.

Here's to lipstick and cocktails and Elizabeth Taylor.

Kate's Random Musings by Kate the Great is licensed under a Creative Commons Attribution-Noncommercial-No Derivative Works 3.0 United States License.
at 2:02:00 PM No comments:

You find yourself with quite a bit of free time when you lose your job.

That was my first discovery after surviving a downsizing two weeks ago. Whereas my time used to be counted by green, gridded logs of billable hours, these days I count time by filling washing machines and emptying dishwashers, running miles along the Ohio riverfront, and making coffee dates and cocktail catch-ups with good friends and business contacts.

Some of it is quite nice, to be sure, but it isn't exactly what I had in mind.

I have always enjoyed hard work.

From my days of hauling sticky, dripping bus pans to running breaking news situations in a broadcast control room - I have always relished the task of tough labor.

I gave a lot to my most recent post. Long hours, personal sacrifices, thoughtful strategy and execution. But each of us are replaceable, and I found myself in a place of replacing.

As unexpected as it was, I should have known better.

The day after the layoff, my dearest friends bandied about and insisted on an evening of celebration.

Bottles popped and glasses raised, I found myself surrounded by some of the most successful women of my age. A publishing strategist, a pharma saleswoman, an attorney/entrepreneur, a published photographer.

These women have received countless professional accolades and have the hardware to prove it. They've been covered in national and local publications. They are trusted sources for professional and community-based information.

These women are rock stars.

And yet, I was surprised to discover that every single one of them had been laid off once before.

Each woman said her moment of termination led to an opportunity for growth and greatness. Yours will too, they told me, as we clinked champagne flutes to toast new beginnings.

Two years ago I went to India. It was a life-changing journey that opened me up to many new perspectives, including an introduction to the Hindu god, Shiva.

Portrayed in a several traditional forms, one of the more popular symbols of Shiva involves a human figure with four or more arms. The Cincinnati Art Museum has a great sculpture of Shiva just beyond the main entrance, cloaked behind some black nylon fringe. It's a muscular form and a beautiful example of the statues you'd see in New Delhi and elsewhere.

So, Shiva. In the Hindu faith, Shiva is a paradoxical deity. He is both the god of destruction and rebirth.  Shiva is typically seen holding a variety of symbolic objects including an hourglass-drum and a tongue of flames. The fiery symbol references the destruction of the world. The hourglass-drum symbolizes creation and the unfolding universe.

Destruction and rebirth. Like the phoenix of Greek mythology, Shiva reminds us we can become a newer, better version of ourselves when we rise from the ashes of our destruction.

A bit heavy, but it's a philosophy that resonates with me.

We can't be our next self, we can't discover new opportunities and challenges, until we close a door on the past. Sometimes that change is our own doing, other times it's not.

As with every other moment of my past, I'm grateful for what has transpired thus far. I've learned a lot, I've discovered new interests and talents. I've met some wonderful people.

But I'm excited about what tomorrow brings.

I'm excited about the universe unfolding before me.

Kate's Random Musings by Kate the Great is licensed under a Creative Commons Attribution-Noncommercial-No Derivative Works 3.0 United States License.
at 2:03:00 PM No comments: