The check came it at, per person, almost as much as the rent for my first apartment in Cincinnati.

And the total was less than a hundred bucks more than my current rent.

Rent is a good bellwether to determine just how valuable an experience or opportunity is to you when traveling. Cafe and croissant for four euro in Paris? Good deal.

But it was a tasting menu involving six different restaurants, and we both knew we'd probably never again visit Dubai.

It was time to dig in and savor what I saved for.

We hopped in a cab at our hotel and the taxi driver said he was excited to make the trip to the Burj al Arab; tourists are not allowed to even enter the hotel unless they pay $75 per person, so few cabbies make the trek. 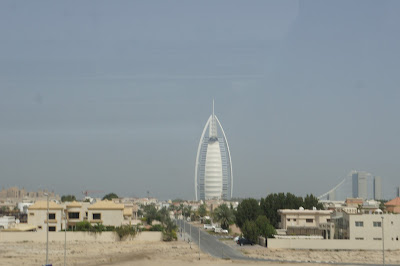 The Burj al Arab bills itself as the only seven-star hotel in the world. It is opulent. Glimmering like it was touched by Midas himself, the hotel boasts that all that glitters is, indeed, gold. And gold is everywhere.

We stepped in the lobby, adorned with colorful furnishings and a sculpted ceiling reminiscent of the golden halos inside Cincinnati's Union Terminal. 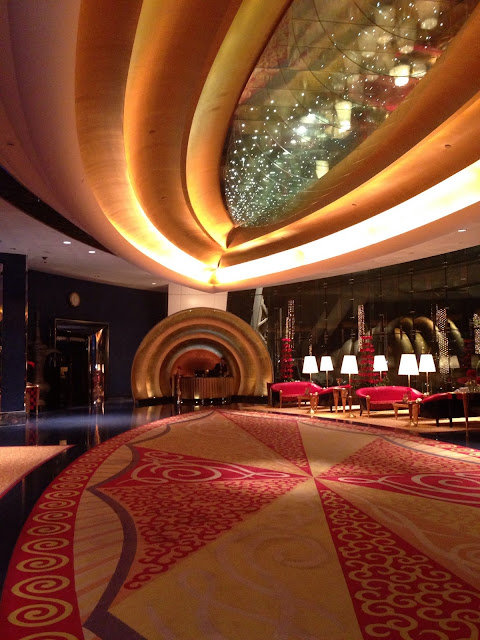 After ascending a staircase beside a cascading waterfall, we were escorted to an elevator to ride to the 27th floor of the Burj.

We stepped out and a host led us to a low table along the glass, allowing us to enjoy our first venue - the Skyview Bar, where we enjoyed craft cocktails while gazing at the twinkling lights along Dubai's coastline. 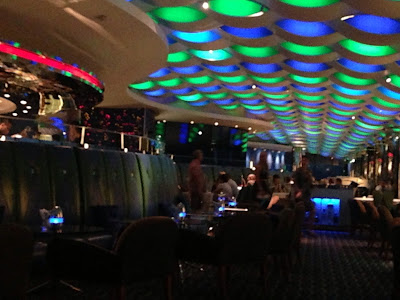 I went with the Dubai Dreams (foreground), made with Bombay Sapphire Gin, Chambord, elderflower syrup, fresh lemon juice, black grapes and kaffir lime leaves. It was a sweeter, fruity take on a standard G&T.

Scott went with the Desert Daisy (background), made with Jose Cuervo, Orange Curacao, fresh lemon juice and hibiscus syrup. We both agreed it was a dressed up margarita. 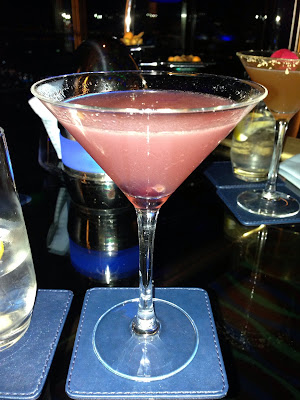 After drinks and nutty nibbles, we were escorted to the dining room on the other side of the brightly colorful space. The Al Muntaha (which means The Ultimate or The Top in Arabic) offers modern European cuisine in a well appointed space. A quaint jazz quartet softly played as we perused the menu and enjoyed bread and pats of salted and unsalted butter.

Scott and I have been travel buddies for years and have adopted a standard of dining some may find a bit odd: we choose different dishes and switch plates mid course. I don't know how Emily Post would feel about this, but I'll bet you a bottle of Chardonnay that Julia Child would approve wholeheartedly.

This restaurant was serving up starters, and we settled on a selection of ceviche of Tasmanian salmon with green mango and papaya salad and hand-cut Wagyu beef tartare with spicy polenta streusel and Kristal caviar. For beverage selections, we both went with champers - Louis Roderer Brut Premier NV.

After our first bit of noshing, we moseyed on to the Al Iwan, a very ornately decorated restaurant that was swathed in crimson drapes and golden touches everywhere. 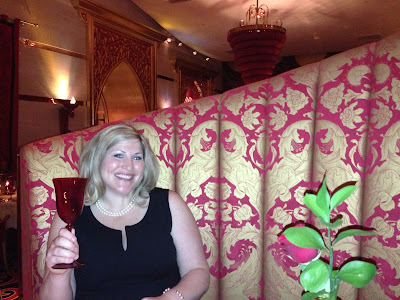 After a nice chat with our Russian server (well over 20 percent of the people in Dubai are foreign nationals working abroad), we selected a meal of foie gras escalope, with braised red cabbage and caramelized cantaloupe melon: 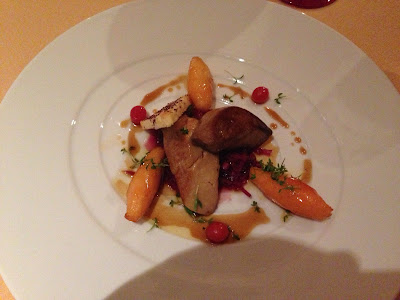 Our other dish featured jumbo prawns and sea scallops with beetroot, hummus, labneh, and moutabel, which is a spicy Middle Eastern eggplant dip: 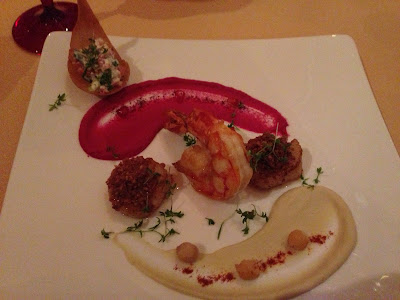 Before we dashed out of this third spot, I had to make a trip to the water closet. I don't typically remark on restrooms, but the opulence of the space compelled me to snap a photo. 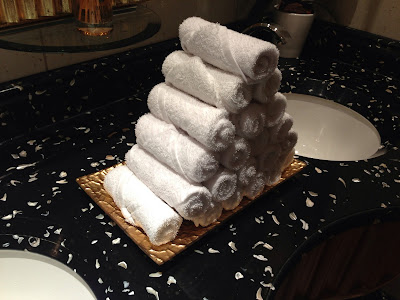 Every restroom in the hotel had an attendant whose sole responsibility, aside from straightening up and wiping away water, was ensuring these hand towel pyramids were replenished at all times.

The counter tops were embedded with bits of pearly shell and featured bottles of Hermes-branded liquid hand soap.

Well, I guess that's where all the money goes, huh?

We journeyed on to Junsui, which was billed as featuring a stylish dining room and 12 cook stations. We felt it was more like a basement dining room where hotel guests grab breakfast before hitting tourist hot spots.

The dining room wasn't worth any photo ops, but the wine glasses were. Scott and I had never seen these unusually shaped glasses - each with a point jutting out from the center of the bowl. We both are well traveled and well dined (he more so on both accounts) and we felt like rubes for not recognizing the stemware.

The server said the points help aerate the wine a bit better. I don't know about that, but we sure enjoyed their unusual appearance (along with the massive size of the glasses). 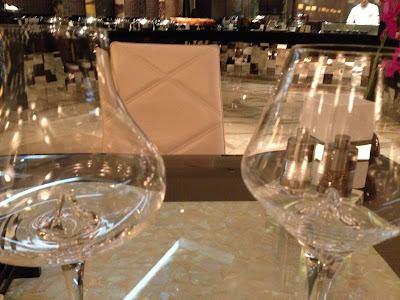 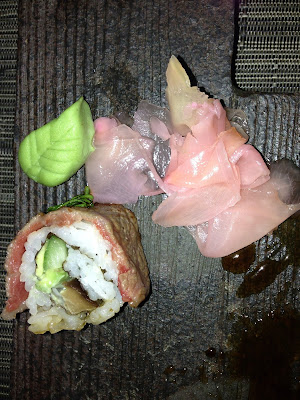 Scott and I are both fans of red meat, and the Wagyu beef at both Junsui and Al Iwan was dynamite. Tender, flavorful. I could have had second and third helpings.

Instead, it was on to Al Mahara for the showstopper dining room of the evening.

Another elevator, a few steps past the Burj's shisha lounge, and we were led to a table beside a massive aquarium. 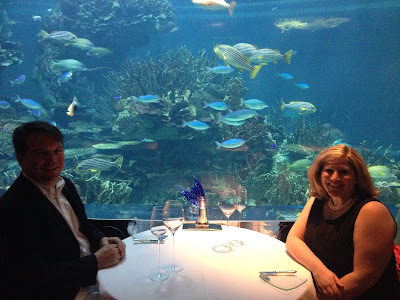 The photo doesn't really do this aquarium justice; the entire dining room is built around this massive floor-to-ceiling vessel, which is stocked with plenty of colorful fish from around the world.

The most notable fish is a green creature named George. He's a Napoleon fish, or humphead wrasse; the former nickname because of the flourish on his forehead. 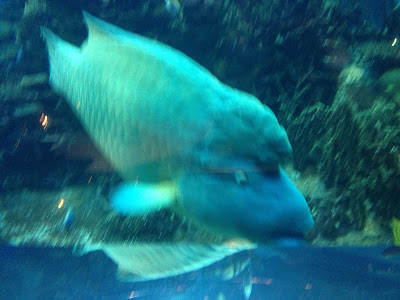 The server told us George is known to make his way from table to table, greeting diners as they gaze at their menu of seafood selections.

Rather than select a third Wagyu beef option, we went with one dish of Atlantic wild turbot cooked in vine leaves, with a vegetable blanquette, cep relish (mushrooms), and tapioca. 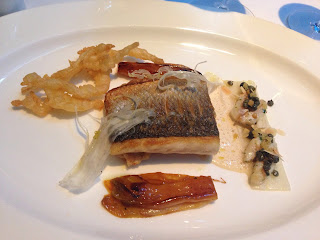 Our second dish featured lamb rack and saddle roasted with raz el hanout - a Moroccan spice blend of more than 30 herbs and spices - and served with plum and orange blossom chutney, braised fennel and dried fruit. 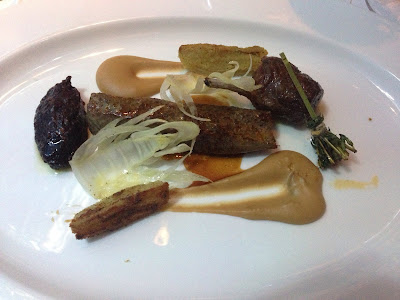 One thing to note about the lamb is that it was served with a little brush of bound herbs and a savory sauce that allowed you to dress your meal to your liking. We were both amused by the feature and had a fun time giving it a full workout. 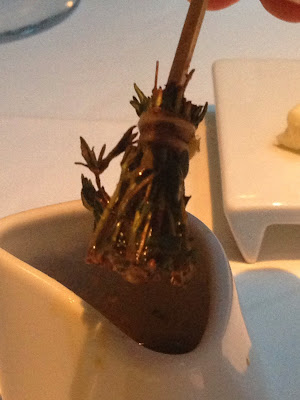 We exchanged sad goodbyes with George and traipsed by the shisha lounge once again, ready for dessert.

Full coffee and tea service was served in the center atrium of the Burj. One thing I enjoy about fancy schmancy restaurants is the pomp and circumstance of many accoutrement... and coffee service had plenty of them. 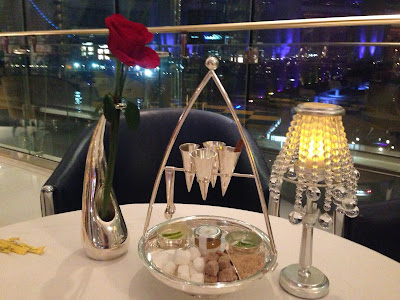 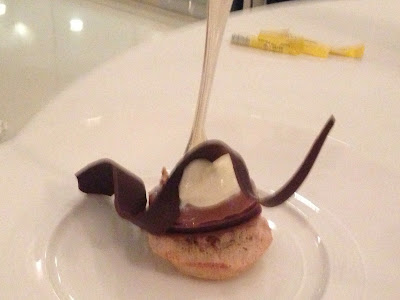 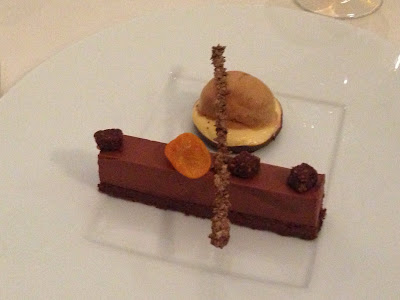 We selected snifters of Remy Martin Grand Cru VS cognac to finish out a luxurious and hearty evening.

A delightful, leisurely dinner under our belts (or Spanx in my case), we were grateful for a remarkable opportunity to experience something truly special.

We both agreed the evening was a little rich for our blood, but it's an experience we'll both never forget. Dinner for two at $880 (including alcohol and tip) should really serve up something out of this world. The Burj's atmosphere, while opulent and extravagant, misses the mark and comes across as Disney World for the Rich.

And maybe some people are okay with that. 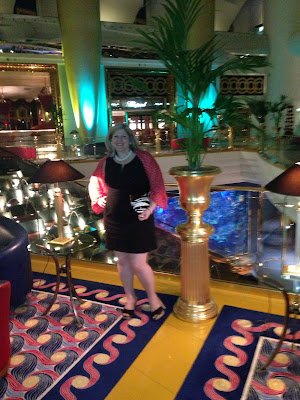 A bit garish for my taste

The food was good in places and weak in others, but for the most part we were fat and happy when we left.

In New York, London, Paris, a remarkable meal could be had for half that, allowing you to enjoy more on your vacation or snatch up a few souvenirs.

Speaking of, more on the rest of our trip - Bangkok - to come...

Saying goodbye is never easy, even when we're prepared for it.

By the time you've hit your 30s, you've likely dealt with some grief. Losing a grandparent can take the wind out of your sails, but it's something that is inevitable. The circle of life is an order of nature that sometimes seems unfair but manageable.

It's those moments of unexpected loss that can throw you for a loop.

My first experience with unexpected grief was the loss of my niece. While Maeve battled a litany of heart conditions and other medical calamities related to Noonan syndrome, I never accepted the thought we'd lose her.

Her short, glorious seven-month-old life taught me volumes about what we're doing here on earth. And it gave me a solid foundation of convictions about where we go next.

Some of these thoughts were born out of the commingling of faith and belief - two entirely different influences. You and I may not see eye to eye on all of these; thanks for respecting my perspective.

Grief has recently made a new wound on my heart, but it has also revived many wonderful memories I haven't dwelled on in years. My heartache has reminded me of a wonderfully fun-loving friend who loved dance-offs, crazy costumes and random parties, and a wild game of Boones Farm races.

He was the same kind man who picked me up at jail after a wild night in my 20s.

We all need good friends from time to time. Sometimes we're the one who needs the friend, and other times we're called upon to be the good friend.

And so, for my friend Zack, a reminder in a favorite song from yesteryear.


PS. Thanks for the couches. I'm still rockin' them.

Kate's Random Musings by Kate the Great is licensed under a Creative Commons Attribution-Noncommercial-No Derivative Works 3.0 United States License.
at 6:23:00 PM No comments: