The latest page in my notepad features a growing list of friends and connections I've let wither on the vine.

Life has been incredibly hectic these past six-eight months, and I've not done enough to maintain relationships I treasure.

So today, I made a list of names (that I continue to add to), and I am slowly reaching out to these good people. It reminds me a bit of my eight-year-old self. Instead of waiting for folks to ring my doorbell, I am hopping on my bike and setting out to maintain connections.

But we never do.

Those conversations are fleeting and the human connection is shallow. I've always preferred more intimate opportunities to reconnect.

Just this week, I enjoyed seeing an old pal in his new OtR digs. He cooked me a fantastic dinner, we enjoyed some vino on his rooftop, and I helped him run some lines for a play he's starring in next month.

And over the course of the evening, we conquered personal and professional challenges, reminisced about some silly memories, and I learned a little bit about Cary Grant.

A good evening by all accounts.

Who's on your list? What friendships deserve some tending?

I met with the play's writers a few months ago to give them some insight on how Cincinnati has evolved in the 18 months since their last production.

We covered the long fought streetcar saga, dating in Cincinnati,  the unique language spoken by P&Gers, and the change happening in Over-the-Rhine.

A lot of those themes and several others have been woven into the production, which runs through July 1. I'm told the original Second City production was the highest grossing play the Playhouse has ever offered, with repeat sell-out nights for several weeks running.

Needless to say, Cincinnati is clamoring once again to see this show. If you haven't yet made plans to check it out, I'd consult your calendar.

You'd be forever regarded as a Great American.

Bluegrass Brit and I completed our trifecta of half marathons this past weekend. 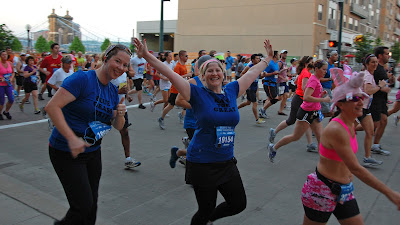 In January, we ran the Carlsbad Half Marathon, a beautiful, flat course along the Pacific Ocean.

Two months later we cruised through Central Kentucky's horse farms with the Run The Bluegrass half marathon. That race was far more challenging than first thought, what with the 36 hills on the course.

But we made it.

This past weekend we conquered the Flying Pig Half Marathon. I didn't really train for this race (okay, I didn't train at all), so we ran/walked it and finished in three hours. Definitely not as good as my California run-only time, but hey, a half marathon is a half marathon.

I've been considering ways to reward myself for the accomplishment, and lately I've been mulling a new Bond No. 9 fragrance (my favorite line of perfumes). I picked up the Coney Island scent on New Year's Eve and am now longing for something springy.

Last month Bond sent me a sample of their newest fragrance, Central Park West, and it is definitely a beauty. Released in March, this fragrance celebrates the grand addresses and greenery of this tony New York City neighborhood.

Heavy on the gardenia, this scent is very fresh and floral.

Quite the opposite of how I smell after 13.1 miles.

Email ThisBlogThis!Share to TwitterShare to FacebookShare to Pinterest
Labels: Bond No. 9, culture, fashion, Playhouse in the Park, random, relationships, running