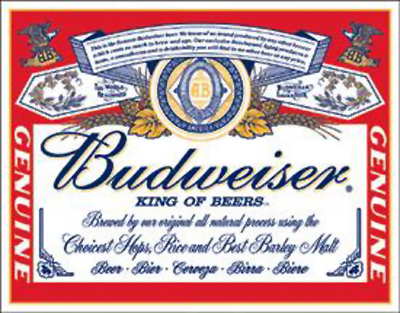 You don't have to be my best friend to know I like to enjoy a beer from time to time.

Readers of my blog know I am a Gal About Town, a chick who likes to visit a variety of watering holes around the Tri-State. Sometimes I am thirsty for a great dirty martini (check out Twist's Deliciously Dirrty - complete with a spicy, salty rim), other times I seek out a chilled pint of beer, beads of condensation running down the icy glass (The Pub at Rookwood Mews has a nice selection of brews).

I am not too choosy about my imbibing, and I have never picked sides in the whole Bud vs. Miller debate. At one time I was a Bud Light girl, then I became a Miller Lite girl. These days, I'll drink whatever's cheaper.

I remember ordering a Budweiser when I was visiting London in October, 2006. I thought it a novelty - taking in an American brew thousands of miles away.

Budweiser is a long standing symbol of America, but all that could change if St. Louis brew baron Anheuser-Busch decides to sell out to Belgian/Brazilian company InBev in a $46.3 billion deal.

Now, that just leaves a bad taste in my mouth.

It's an unfortunate combination of elements - a weak dollar, strong international currencies and a sputtering American economy - that is leading to this fire sale on American soil.

Just this week, Anheuser-Busch announced it has signed a deal with a distributor, expanding to Vietnam. For the first time, people in Ho Cho Minh City will be able to sip on the same suds as farmers in the Plains, steel workers in the Rust Belt and fishermen in the Bayou.

I think it's great when an American business opens new doors and delivers the kinds of products people in the U.S. have enjoyed and depended on for years.

I just disagree when those traditional goods are bought out by foreign entities.

Email ThisBlogThis!Share to TwitterShare to FacebookShare to Pinterest
Labels: bitching

I feel the same way about this buyout of American companies. The world is entering new territory in the 21st century.