I Want To F*ck John Kasich Like An Animal

Did I ever tell y'all how I was on the board of College Republicans?

True story. I was the only one who had a tongue ring. There I was in my twin-sets and tongue ring, on the board of the University of Kentucky CRs, wondering why I was different from all the others. While my personal life style has veered away from the conventional, the fact of the matter is... 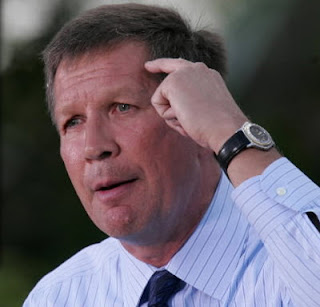 I mean, really. I sit here, gazing at the bright lights of Downtown Cincinnati, and I long for something more peaceful and remote. Something far beyond the Urban Core. I long for an acre and a picket fence and a big fucking Escalade. I love driving. "But, Kate," you say. "You gave up your car. How can you really love driving?"

And I'll respond by saying that my European sedan wasn't really enough to satisfy my needs. What I really want is a big ass SUV. Something that gets less than 30 miles to a gallon. Something I can drive with just myself behind the wheel, something that conveys to the masses that I am rollin'.

'Cause that's what we do. Right?

I actually have moist fantasies of John Kasich when I'm sleeping. I think about how he wants to take down those crazy mother fuckers - the Train Cultists? - and I think about how he's keeping me safe by encouraging people like me to move out to the suburbs.

We really don't need a streetcar, do we? Why in the hell would we want to invest in anything that would connect people to jobs and commerce and support something that invests in Downtown Cincinnati and Over-the-Rhine?

You know what else I love about John Kasich? He's trying to protect my financial best interests. I'm a taxpayer, and I want to make sure all my dollars go to the most important, top priorities in Ohio. Like a bus station in Canton.

Do you all even really know how important Canton is to Ohio?

The Pro Football Hall of Fame is there. That means something like, a trillion million dollars in revenue for Ohio. Right? And that's absolutely why Ohio should redirect a shit load of money to support some bus effort in that city, population 73,007 (not that I'm counting, or anything).

Another reason why I want to fuck John Kasich. He gives a rat's ass about teachers. And why should we, really? Fact of the matter is, John Kasich wants to level the playing field and make sure lots of people don't have the power to negotiate for ritzy salaries. Teachers, firefighters, bus drivers - they're all rollin' in it, right? I mean, every bus driver I know ends the day by sliding their ass into some cushy, leather upholstered Mercedes Benz, right?

And teachers. The damn teachers. If I had a dollar for every time I saw a teacher at Cincinnati Country Club, I'd be rich.

The fact of the matter is, teachers and firefighters and the rest of those unionized people don't deserve the right to negotiate for better wages. Just yesterday, Kasich said hell to the no to union members who want the right join forces and ask for better pay and benefits.

When I interview for a job, I take what they offer. One week of vacation? Sign me up. No overtime? Yessssss! No opportunity for Long Term Disability? Why the hell would I need that. Period.

Nobody should ever, ever, ever get the chance to ask for more than what their employer offers.

God, I love you, John Kasich.

I want to fuck John Kasich like an animal.

Because sometimes it's fun to play Role Reversal.

Kate's Random Musings by Kate the Great is licensed under a Creative Commons Attribution-Noncommercial-No Derivative Works 3.0 United States License.
at 7:35:00 AM

Brilliant. Inspired and hilarious. Love it!

From the Left and Right said...

I really am enjoying this new era of civility.