These Boots Are Made For Wearing

The smell of leather wafted out the door like an aromatic dust cloud. 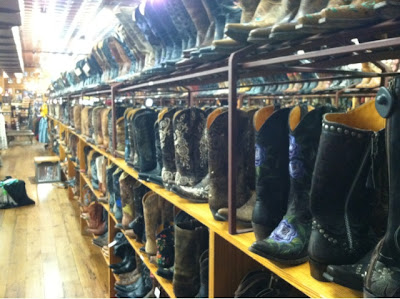 It was my last morning in Austin, Texas, and I decided to call up the cab and ask the driver to pick me up 30 minutes earlier than planned.
"I need to buy a pair of cowboy boots before I set out for Cincinnati," I told the driver.
Need is relative, right?
The brightly painted yellow minivan cruised down South Congress to Allens Boots, widely regarded as the best place to cowboy up in the capital city of Texas. 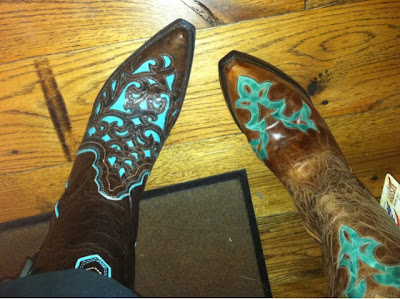 Several of the wildly carved and embroidered pairs on the racks beckoned me to try them on. Many of the boots feature turquoise adornment, a look that the salesman told me is a classic theme in Texan Western wear.
Allens features a variety of boots at several price points, all of them pretty pricey. These boots are an investment, complete with beautiful aged leather, hand crafted needlework and embroidery and other embellishments. Most of the pairs I saw ran between $250 and $500.
I spied the pair below and surmised they were the Manolo Blahniks of cowboy boots. Lucchese boots are known far and wide for their beautiful leatherwork and rare leathers. The pair in the photo went for a bit over a thousand bucks. 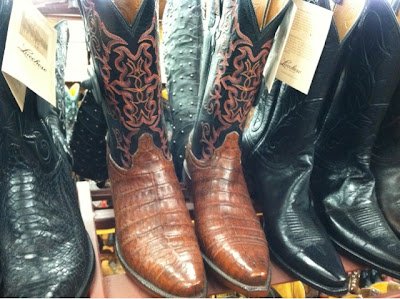 I'd stepped in to Allens initially set on finding some red boots. Red is one of my favorite colors, and I knew a ruby hued pair would compliment a good bit of my wardrobe.
I combed through the variety of bedazzled, embroidered and appliqued boots to find a nice red pair, but I didn't see many that spoke to me. 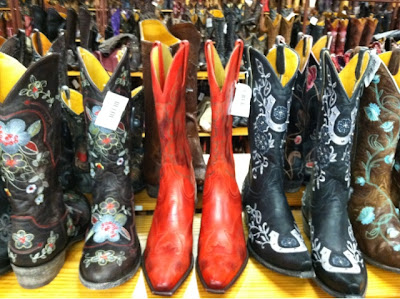 The salesman agreed most of the nicer looking boots came in black or brown. I was unsure what the protocol was - could a gal wear brown boots with a black dress? Did the taboo of mixing brown and black stand in the Lone Star State?
A saleswoman shook her head with a smile. "Nope. You can wear black with brown and brown with black. It used to be that you had to match, but these days any pair of cowboy boots wins an outfit."
So there.
After trying on about a dozen pairs of boots, I decided I wanted an extremely pointed toe and a polished heel, as opposed to a distressed one. 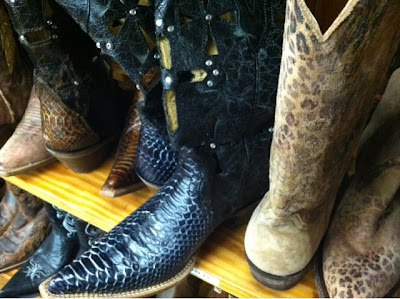 I lingered on a pair of black python boots with significant cutout work and sparkly studs, but decided they probably wouldn't fly in a more casual setting.
That's when the strapping, blond cowboy of a salesman drawled out, "I usually tell my Northern customers to get a more understated pair for their first set of cowboy boots. Come back to Austin another time and get something a little wild."
I settled on a brown pair of boots with green leatherwork trim. My personal cowboy assistant told me they'd look great with jeans, sundresses and skirts. 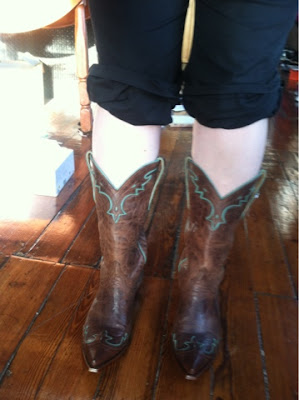 It's been over a week since I returned from Texas, and I've managed to wear these boots at least three times. The rich leather smell is still rich and fragrant, and the Western detailing has elicited a few raised eyebrows in Downtown Cincinnati.
Hee haw.
at 7:21:00 AM

My boss has informed me that you should only wear cowboy boots 2-3 times a week in order to get the most life out of them. if you start wearing them all the time they will age prematurely and your $100+ investment will be for naught.