My Nana K. called me Glamour Girl the last time she saw me.

I was a somewhat slighter version of myself almost nine years ago. Nicely tanned and with fresh highlights on my head, I was in fighting form for my sister's weekend wedding festivities.

Clearing almost six-feet-tall in my stilettos, I towered over my little nana, who was the epitome of refinement and social grace. My grandmother had the ability to turn on her charm at a moment's notice, always dressed to the nines and with a twinkle in her eye.

"Ah, and there's my Glamour Girl," she murmured as I bent down to embrace her, clad in her pearls and a smart pink suit.

Anyone born in my grandmother's generation was familiar with glamour. People that era ushered in Old Hollywood, the Roaring 20s and Art Deco. Sure, they saw the stock market crash of 1929 and the Great Depression that followed, but our grandparents enjoyed the Era of Good Feeling that followed the World Wars, too.

I've always had a thing for sparkles, and Old Hollywood was full of glitter. Cincinnati's Taft Museum of Art is featuring a special exhibition of Edward Steichen's work - iconic portraiture that captured Old Hollywood at their best (on display through January 27).

I had a chance to preview the exhibit a few weeks ago and was stunned by the photographer's dramatic use of light and pose. A regular contributor to Vanity Fair and Vogue, Steichen knew how to direct his subjects to capture an image that showed an actress at her best, and in a way the public perceived her to be.

Every human being has a moment of vulnerability or insecurity, but Steichen used his talents behind the lens to capture the facade of each celebrity or politician. The collection left behind is dramatic, inimitable and a pioneering example of fashion photography.

To this day, he continues to influence photographers who aspire to make the pages of Vogue. 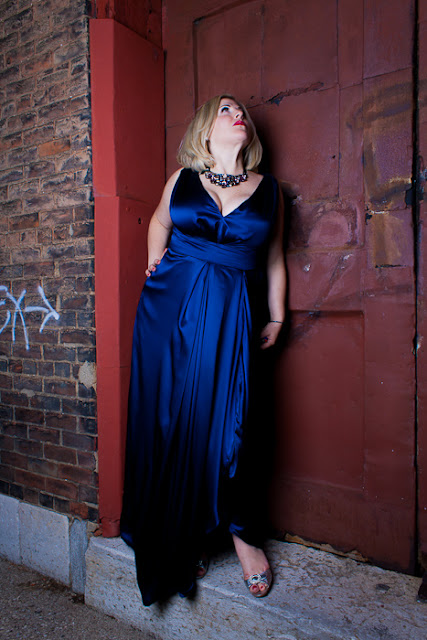 All these years later, I am still living up to my grandmother's nickname for me. My Nana K. has passed on and is probably holding court somewhere, a Manhattan in hand, but I am sure she is delighting in my continued forays into all things glamorous.

Nana rarely tipped her hand to reveal insecurity and stability, just like a Steichen photo. Instead, she was always perfectly coiffed, perfectly well spoken, perfectly gracious. A perfect version of herself.

Email ThisBlogThis!Share to TwitterShare to FacebookShare to Pinterest
Labels: Amy Elisabeth Photography, culture, family, fashion, out and about, photography, Taft Museum of Art

I'm a feminist and all, but...I'd give my left pinkie toe for cleavage like yours. Brava, dear. Brava.