By birth, I am a Southerner, but I was predominantly raised in the Midwest. My parents are both Midwest stock - my dad's family settled in Youngstown a few generations ago, but they first lived in the Pittsburgh area when they arrived from Ireland and England.

My mother's family has lived in Duluth, Minnesota for generations, but our roots go far back to Indiana (before arriving from Germany and Austria).

Middle America runs in our blood, but we were lucky to get a 14 year trip to New England beginning my sophomore year in high school. 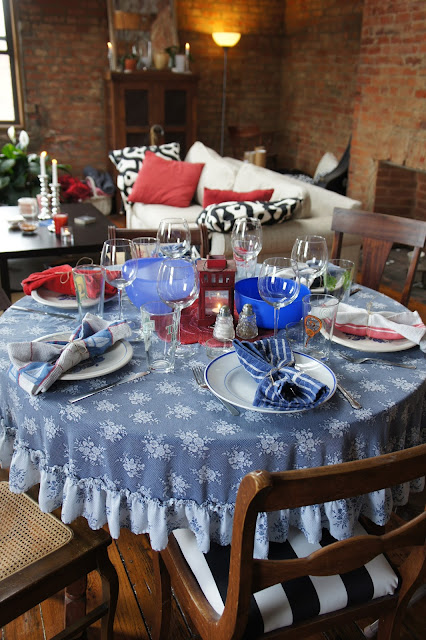 In Connecticut, they call it the Long Island Sound. It's not really the ocean, they say. To us it was. That big, beautiful expanse of water lapped up at the end of our street, and we were smitten the first time we laid eyes on it.

New England - made up of Maine, New Hampshire, Vermont, Massachusetts, Rhode Island and Connecticut - revels in a different kind of lifestyle. Relaxed preppy leanings and celebrations that choose simplicity over flash.

Good, bad or indifferent, that describes my family to a T. 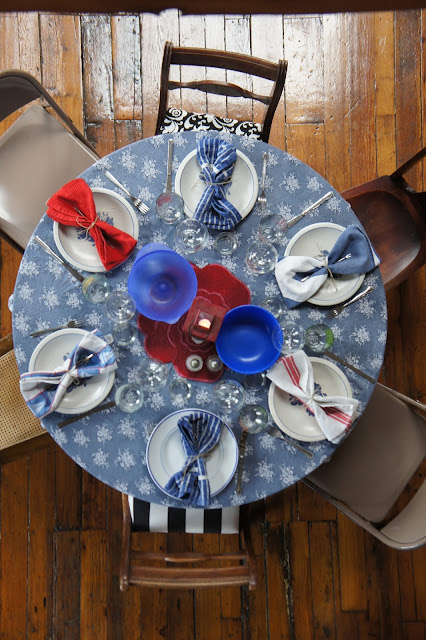 A few years ago, my mother informed me she was doing away with all the holidays. My sister in Atlanta inherited Christmas because she has children; my youngest sister in Columbus inherited Thanksgiving because she and her boyfriend would be able to handle such a daunting event together.

I inherited the annual lobster boil.

None of us live in New England any longer. We've returned to the Midwest to enjoy a more comfortable standard of living and everyday exchanges of please and thank-you.

But we still love our seafood. 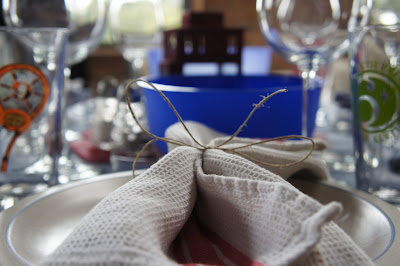 My parents, my sister, her boyfriend and Scott all came over for our annual summer tradition, my parents bringing along ten feisty lobsters and two pounds of mussels (a family favorite). My dad picks up his lobsters from Lobsta Bakes in Newtown, where the owner receives shipments daily from his family's business in Maine. 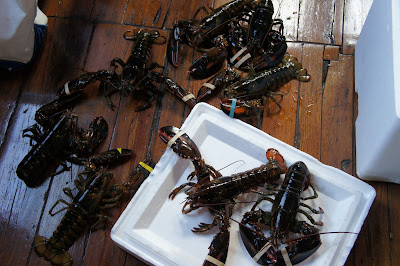 The evening is one of my favorites of the summer. We each show up wearing our rattiest T-shirt and enjoy an evening of good food, vinho verde, conversation and great laughs.

This year's dinner was especially raucous thanks to a game of Cards Against Humanity. My parents are pretty cool for their ability to roll with the racy innuendo. 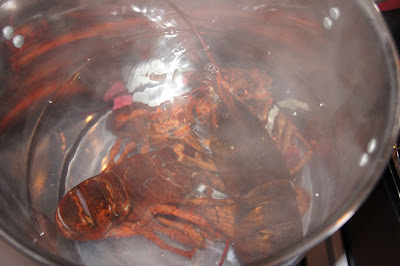 I am surprised by how many Midwesterners are intimidated by Connecticut's favorite crustacean. Lobster can be a bit daunting; unless you hunt regularly, you likely don't have as much involvement in your meal's end days.

Formerly a poor man's meal, lobster is quite delicious and has long been a New England tradition in part because of their availability in that part of the U.S.

To prepare lobster, fill a large stock pot half full of water. Add a tablespoon of sea salt. Bring the pot to a rolling boil (this will take some time).

After the pot begins to boil, drop in all of your lobsters and let them sit in their sauna for 20 minutes or so.

A note about the lobsters. They don't scream. They don't have vocal cords. The squeaks you hear are made by air passing through the shells. If that makes you feel any better about preparing your meal, so be it.

Once your lobster is cooked, prepare to dig in. This will feel a little bit like high school biology. 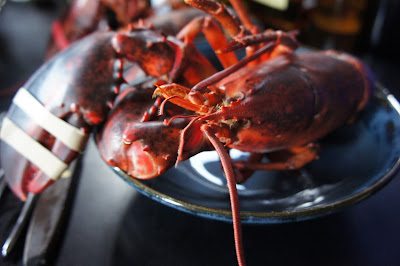 You'll need a few standard tools: A pick. Some sets just have a pick with a pointy, needle-like end; I prefer the kind that has a sort of shovel on one end, and a pitchfork on the other end (below left). These two ends will come in handy later.

Next, a cracker. Some people use crackers that double as metal nutcrackers. I like my crackers because they can grip lobster parts very well. It's up to your preference and availability.

Finally, you'll need a knife. Steak knife, carving knife or Swiss Army - you need whatever makes you feel like a kitchen surgeon. 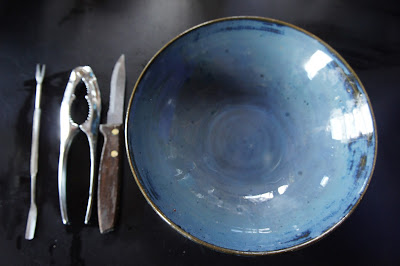 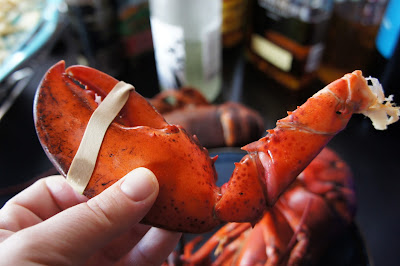 Take your pick and dig around in the thumb (I use the scoop end of the pick for this task) - there's a nice piece of meat in there. 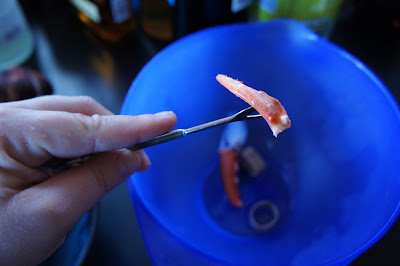 Next, take your cracker and go to town on breaking the claw. There's no rhyme or reason on this one - you'll be eating whatever you pull out, whether you can pull the claw meat out in one piece or not. 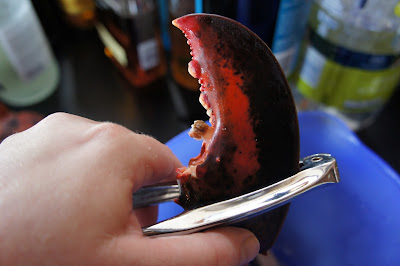 You'll be left with the lobster's arm; use your cracker to break up the shell, and then use your pick (the pitch fork end) to dig around and pull out your meat. Every joint has a bite of goodness. 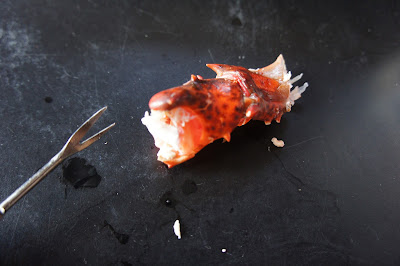 After you're finished enjoying the claw, get ready to tackle the tail. First, use your hands to twist the tail off. Put the body aside - you'll want that later.

At this point, I should mention lobster roe. Pictured below on the right, you'll notice a dark red substance in the middle of the lobster's body. That is lobster roe. Ranging between black and Play Doh red, roe is a waxy substance made of lobster eggs. Most people don't eat it. Andrew Zimmern does, if that gives you some perspective. 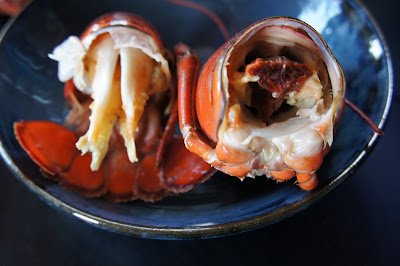 Okay. Lobster tail. This is when you'll need your knife. Use one hand to hold the tail (its curved shape can make it a bit difficult to cut), and use the other to guide your blade down the length of the inside of the tail.

This reminds me of the fetal pig, the frog and everything else about biology class. 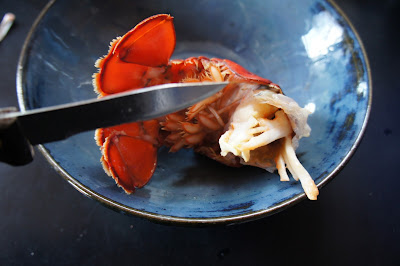 Once you've cut your way down the inside of the tail, use some muscle to pull the shell off from around the meat. 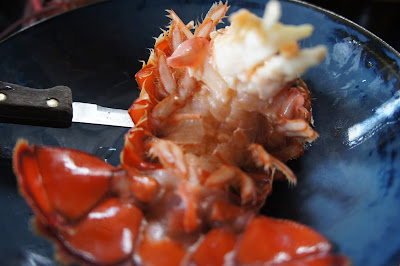 This is when most people cash in and call it a night. Not so in New England.

There's still plenty of meat to be had.

Pull the top of the lobster's body off and get ready to dig in.

You'll notice some greenish, guacamole-looking stuff. That's called the tomalley. Again, Andrew Zimmern loves this stuff, but it's not my style. 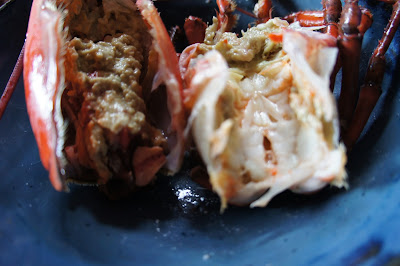 After you remove the top, you'll notice the legs are attached to a mass of meat and shell.

Using your fingers, pull apart the shell and look for lumps of lobster meat. You can count on finding some sizable chunks at the base of each leg. Go from joint to joint and savor every last morsel. 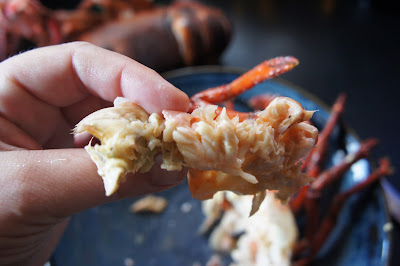 Now, the legs might be the best way to separate a New Englander from everyone else.

Most people would leave the legs behind, but a New Englander knows there are strips of delicious lobster meat in each leg.

Rip apart the leg until you have a good portion disconnected at the joints. Putting the leg in your mouth,  rapidly bite down on it like you'd bite on a straw, and pull the meat out as you pull the leg shell out between your teeth. 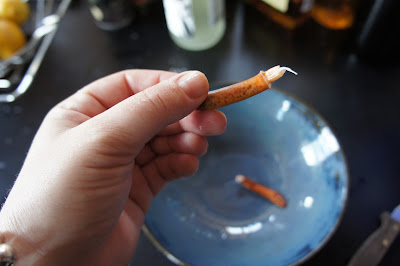 Lobster is a delicious summer tradition that can be enjoyed with simple sides - boiled ears of corn and red potatoes are quite popular. 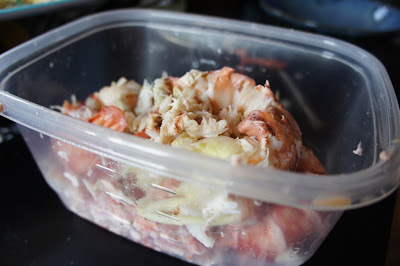 Four lobsters worth of leftovers! This is a larger sized container...

When we enjoyed this meal in Connecticut, we'd typically cover our patio table with newspaper and pitch everything at the end of the night. A lobster dinner is pretty messy - hence the ratty T-shirts. 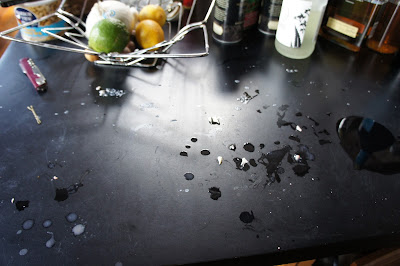 And that's why God invented cleaning sprays and paper towels.

We finished the meal with slices of lemon blueberry cake from the BonBonerie and sips of my homemade limoncello.

A spectacular finish to another successful family tradition.

Those are the moments that count.

Kate's Random Musings by Kate the Great is licensed under a Creative Commons Attribution-Noncommercial-No Derivative Works 3.0 United States License.
at 7:20:00 AM