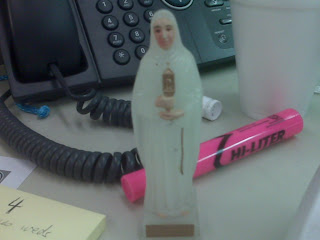 Please watch over George Stephanopolous-or-however-you-spell-it as he takes on his first week of replacing Diane Sawyer on Good Morning America.

Help George to aspire to having a personality more congenial than a cardboard cereal box. Allow George to make superfluous, editorial comments that do more than show him to be impersonal and lacking depth.

Give George some shoe lifts or an overnight growth spurt or something comparable that helps change the current appearance that he is Robin Roberts' ventriloquist dummy and they're about to perform a trick with a glass of water.

Teach George levity (has his marriage to Ali Wentworth done nothing to break this man's steely exterior?) and give him the gift of approachability.

And if all else fails, unleash Sawyer's fembot clone.

I am fighting off making the switch to Today (or, God forbid, the Early Show).

I have laughed my ass of over this post.....I am trying to hang in there with GMA, but I'm a little scared....

So funny! Change is so hard, eh?