He asked me for directions, a stuffed backpack behind him and rollerblades in tow. 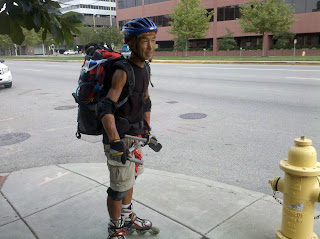 The smaller Asian man said he was headed to the river - he just didn't know which direction that was, exactly. I pointed off to the south and told him it was just a few blocks away from our spot on Central Parkway. He smiled, said thank you and asked if there were any inexpensive motels along the river.

I thought it odd, considering this man was on foot, and that's when he told me he was rollerblading across the United States.

Ken had made it all the way to the corner of Central Parkway and Vine on his rollerblades, with only a backpack full of necessities and a makeshift brake made out of a mop handle and piece of worn tire tread. 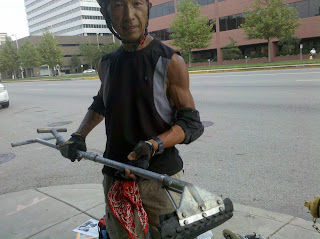 What an amazing feat.

Whipping out the journalistic skills of my past, I peppered Ken with questions about his trek. Where did you start? How long have you been on the road? Have you talked to any media?

He told me he started in Santa Monica, CA in April with the intention of completing the journey in three months. There we stood, shooting the breeze on the first day of August, and Ken still had quite a way to go before making it to his final destination in Cape Cod.

Ken told me the entire journey was dedicated to the American people. He explained that, at a spry 63 years old (yes, really), he was grateful for the assistance Americans gave to Japan after World War II. He told of being a small boy in a Japanese classroom, having a teacher share, "Every drop of milk you drink is because of the Americans. Every pat of margarine and every slice of bread - someone from the United States sent it over for you."

This experience, the kindness we showed to Japan after destroying them with Little Boy and Fat Man in what was possibly the darkest days of our world's history - that was why Ken was strapping on his rollerblades every day. 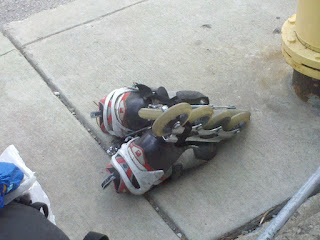 He told me he rode his bike across the U.S. twenty years ago for an effort with similar intent. This time, Ken said, "I must rollerblade because it is more physically strenuous and is the best effort I can make to show my thanks."

I asked Ken if he had a few minutes to wait with me in the shade until a TV camera could show up. This was a remarkable story that nobody knew - a precious treasure that I felt I wasn't worthy to keep to myself.

Ken unzipped his pack and and pulled out newspaper clippings - stories of Ken out west, venturing on the open road with wheels and bearings beneath his feet. He was excited about the prospect of sharing his story with someone else, and I was delighted to sit back and listen. 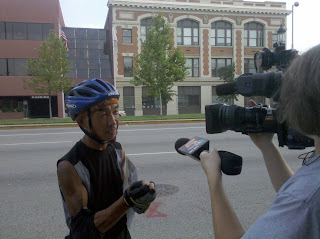 This is what life is about.

We meet each other on streets, in bars and on buses. A single glance can turn into a conversation - a talk that can turn into an opportunity for communion, appreciation and impact.

My 45 minutes with Ken made a deeply profound impact on me. Here is a guy who is using his own financial resources, 6,600 miles away from his home in Tokyo, wheeling on asphalt in the dead of summer to show his gratitude for my country.

And to think, so many of us in this nation question or fail to appreciate the liberties and blessings afforded to us here.

After the interview with the camerawoman, Ken and I exchanged information. I wanted to follow his journey in the worst way and was tickled when I discovered we could be Facebook friends.

Yesterday my Facebook stream shared with me that Ken had made it to Massachusetts.

A massive smile spread across my face. 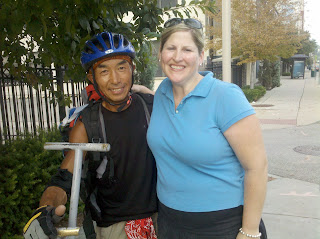 You can friend Ken Yamashita here.

Wow!!! That is just AMAZING!!! Way to go Ken!!! That is such an inspiring story! Thank you Kate for sharing it.

I love this story! Thanks Kate for sharing it.

What a great day KtG - thanks for writing about Ken and his journey!