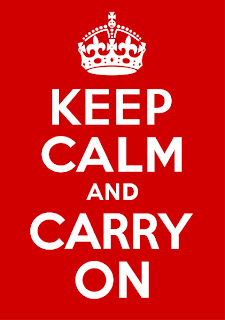 Keep Calm and Carry On.

It was a marketing theme thought up by the British government during World War II, only to be used in the event of an invasion. The idea relied on the notion that if a country of scared and threatened people could somehow stay focused and collected during the worst of it, they'd come out victors in the end.

I find some similar themes among my 30-something friends.

Had a great conversation with a 40-something colleague last week about how the midlife crisis is actually happening much earlier for 30-somethings. Whereas our parents and previous generations got married in their early 20s, had children, bought homes and climbed up the professional ladder - only to be a person they didn't recognize and in a place they didn't anticipate - many of us 30-somethings are putting off marriage, children and the whole kit and caboodle.

We're tossing the idea of the nuclear family on its ear and choosing instead to nurture interests, bring aspirations to fruition and become more self-actualized.

This dynamic directly complements generational studies that show Gen Xers would rather have more free time and less money. We Xers crave balance and meaning in our lives, and if that means doing away with traditional constructs, so be it.

Modern day 30-somethings are staring in the face of reality. We are questioning, no, challenging the expectations of a previous era. And so we are giving up our starter marriages, prolonging marriage or toying with the idea of doing away with marriage all together.

Some of us (likely, more of us, too) are eschewing the idea of family and children, in part because of these aspirations for discovery, but also because we are all too aware of the economic hardships our generation will bear in years to come.

Others are delaying the idea of having children, choosing instead to buy bassinets and car seats and breast pumps in our late 30s or early 40s. Thanks to the advances of modern medicine, and the more widely accepted philosophy that one does not have to share genetic code with a child to be considered family, we are inseminating, finding surrogates, adopting and otherwise bending the boundaries of parenthood.

This presents an interesting and sometimes challenging dynamic.

This quest for personal destiny does not jive with Mother Nature's schedule. While women bear the burden of biology where birthing babies is concerned, both man and woman age in similar ways, and so keeping up with a toddler is possibly a greater challenge for both sexes at 40 or 50 or even 60 than it is in one's teens and 20s.

This is the conundrum that keeps me up at night.

I am so torn. My 30s have been a miraculous gift of letting the dust settle after my raucous and irresponsible 20s. I am now more financially solvent, more disciplined and more genuine with myself and others.

This decade has become an opportunity to find my truest self - a discovery that still reveals itself.

That said, I am a bit terrified I won't settle down and couple up in time to meet the deadline of my youth.

Simply put: Sometimes I worry that by moving up my midlife crisis to my 30s, I might miss out on what this decade was supposed to be about in the first place.

My body and my spirit are at war with each other, and the only thing I can do is keep calm and carry on.

Because, no matter which side wins, I will have to live with the consequences and come out a victor in the end.

Great post! I married what many would consider early (24, almost 25) but only pushed wedding up because we both were headed to grad school and knew we had some very busy years ahead of us. AT THE RECEPTION...yes, immediately after the ceremony...people were taking bets on when we'd have children. Not if. When. I was insulted, obviously.

Fast forward...a variety of awkward family dinners, holidays and weddings where people seemed to think my reproductive system was their business. Seriously, who brings up "trying" in the middle of a restaurant? Though I am shy and hate confrontation, eventually this wore through my patience and I started straight up telling people to mind their business. But they still don't.

Last year, my husband was diagnosed with cancer and was ordered to start chemo immediately. We had three days to decide if we wanted to take steps in case the treatment rendered him infertile. We had three days but it took us all of three hours to decide, no, we would not opt for in vitro if it ever came to that. We are ambiguous on the kid question anyway and decided nature would take its course, if ever. Would you believe that with him facing the big C, peoples' big concern was us not banking sperm?

Today, my husband is in remission and on his way to full recovery. We've been advised to not try to have children for at least two years, when we know the effects of chemo and radiation will mostly be gone. Even then, there's a chance he's infertile. I flat out announced this advice from the doctors to curtail the kid questions--and would you believe it hasn't helped a bit?

I guess my point is that a big reason we question ourselves so much is it seems nobody else can leave us alone about it. I constantly walk the line between wanting to keep our reproductive decisions private and feeling compelled to be blunt to make people STFU. Neither approach seems to work. I can't have an upset stomach without someone gleefully asking "ARE YOU PREGNANT??!!" I can't hold a baby without someone squealing, "DON'T YOU WANT ONE??!!" All in all, when it comes to our bodies, our 20's and 30's can be pretty damn annoying.

When it comes to children, family can really project their own needs onto their kin. I have found the best response to be "if you require children then by all means have or adopt one"

The 'mid life crisis' convo is interesting. Any psychologist worth their salt will tell you there is no such thing - the term was media-created designed to sell products based off of fear. The fact is it's NORMAL and HEALTHY to question where one's energy is going. We only have so much time on this planet and Gen X is living in a very different culture and economy than our parents did. We are reacting to the negative and positive consquences of change their generation enacted.

I see it as a very good sign that we question our lives and life path earlier in age.

I had someone ask me, at my grandmother's funeral, when my now ex-husband and I were having children. I hadn't seen the guy since I was 3, and he immediately asked about my sex life. Awesome.

I am tempted, now, when people ask questions like when am I getting married, when am I having children... to answer in ways that are just as offensive. "Well, we had unprotected sex last night, doggie style! Hope it takes!"

It's the Idiocrasizing of America.

These information which you can share is really great. In all these there are so many things which is really very interesting that can be created to sell the products that can based on fear.
abendkleid

I got married at 25 which, I believe, is the "average" right now in the US. (My husband was 28.) I got pregnant almost immediately and had our son at the age of 26. We were very surprised by how quickly it happened, but not at all disappointed.

But.
I really do understand the desire to wait. And I sympathize with those who would rather spend their 20s as a single person or in a monogamous relationship without children.

I decided, at 22, that marriage and children were a high priority for me. Higher a priority than enjoying a few more years of late night dining and drinking, world traveling, and serial monogamy. So, I pursued it like some other 22 year old women pursue Law School or the Peace Corps. Having a family is as much an adventure as the things some of my peers are doing--it simply requires taking other people along for the ride.

Even though I may disagree with you about the urgency of marriage and children, I really appreciate your honesty. It seems like you are self-aware enough to know when the time is right.

(And I'm honest and self-aware enough to know that part of me wishes I was drinking with some friends at Neon's tonight instead of reading blogs while my husband is collapsed on the couch after a long day at work and my son is sleeping in his crib upstairs.)

I enjoy reading your stuff.