The Gift of Perfection

Humanity is not perfect.

We stumble, we second guess, we stall.

But occasionally,  we are offered a fleeting moment that tells us we are on track. Our hard work, our pure intentions and our greatest aspirations are all working together in harmony.

That is how I feel about this weekend. 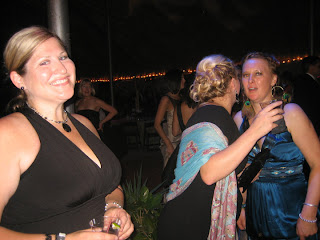 Photo by Linda Averbeck.﻿
Mugging for the camera as Bluegrass Brit and Zooey share a secret.

Did you know the Cincinnati Zoo and Botanical Garden receives the least funding of all of Ohio's zoos? And yet it is regarded as the nation's "greenest" zoo, and also one of the best in the U.S.?

Zoofari is the Zoo's primary fundraiser, and I was proud to volunteer for a third year in a row. I was paired with Kevin Huber of the Cincinnati Bengals for my assignment. What a nice guy.
*** *** ***

If you're seeking a rural experience this autumn, this is the place for you.

Fields full of pumpkins, big, old barns full of antiques, jams, fruit and other treats, a corn maze, face painting - it's a great place to go if you want to ditch the city for a while and celebrate the season.

We decided to meander through the heart of Lebanon before heading home and stumbled upon the town's annual Country Applefest. Booths of food and crafts lined the streets, which were full of people chowing down on barbecue, french fries and funnel cakes.

Tucked between charming antique shops and town mainstays, we found the Village Wine Cellars. Full of racks of wine and comfy couches, the shop sells wine, beer and spirits a plenty. We found a nice torrontes and paid bottle price plus a five dollar corkage fee.

It was a spontaneous but welcome respite with a dear friend on a glorious afternoon.


Saturday night was all about the many shades of rock and roll.

The MidPoint Music Festival served up an awesome evening of music, with none other than the legendary Tom Tom Club headlining at the sweet bar right across the street from my apartment. 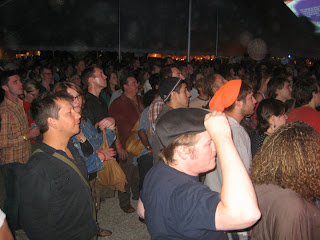 The Rock and Roll Hall of Fame band recorded the epic "Genius of Love" - widely regarded as one of the first ever Hip Hop songs. It's been sampled over 50 times (most recently by Mariah Carey for her hit, "Fantasy.")

Grammer's tent was crammed with an awesome crowd... this pic covers just about a quarter of it. I'm the girl in the pig tails and librarian glasses, second from the left (next to the environmental genius in the yellow plaid shirt).

*** *** ***
Sometimes it takes a little spit and polish to make something look brand new.

Other times, it takes a brand new perspective and a whole lot of heart. 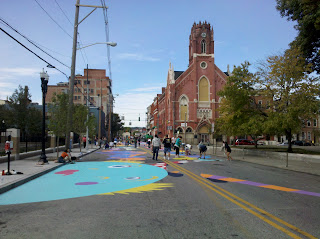 Hundreds of people converged on 12th Street in Over-the-Rhine for ArtsWave's (formerly the Fine Arts Fund) Paint The Street, an effort to turn the blocks between Main Street and Central Parkway into a giant mural. 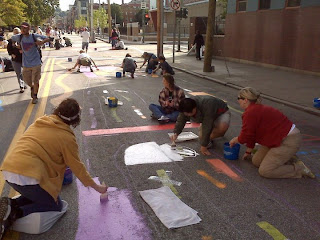 Photo by Steve Nixon﻿
A resident of OtR, I've known about this project for over a month now, and the anticipation had been building inside me like a billion bubbles in a champagne bottle. 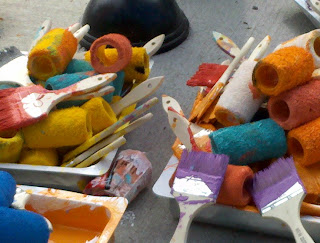 Over-the-Rhine is an emerging neighborhood that continues to see a residential resurgence. I cannot think of a single event that has served up a bigger show of love for this close-knit community.

I am the "artist" behind some of the yellow and orange in the photo above. I volunteered to take photos of other artists after my assigned painting shift - the energy, the enthusiasm and the diversity of the crowd was beautiful.


The morning air was full of so much love, pride and hope, and I am grateful for the opportunity to leave a mark on the neighborhood I am thrilled to call home. 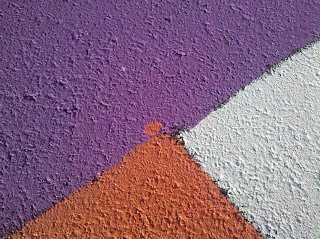 Each day offers us an opportunity to leave our fingerprints (or thumbprint) behind on something.

Sometimes we make mistakes, and sometimes we're on the spot.

This weekend restored the direction of my soul and the reach of my hands.

That sounds like an amazingly fun, yet busy, weekend.

I offered to take pictures of other artists, after my change to attribute the painting - the energy, enthusiasm and diversity of the crowd was beautiful.