I Shot An Uzi

True story: My dad was shot in the face in a drive-by shooting over 40 years ago in Youngstown, Ohio. He has a tiny, one-inch scar on the right side of his face and some great street cred.

Needless to say, we don't keep firearms in the house. 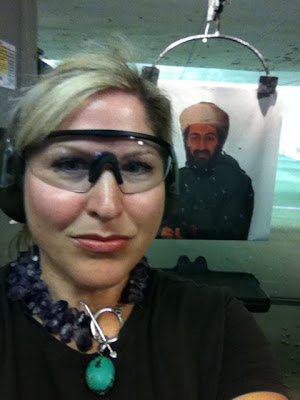 But I've always been curious about guns. Not curious-excited, more like curious-intimidated. I know some people love guns - my old pal Jos slept with a shiny Glock 9mm next to his bed when he lived on Overton Street in Newport.

Sometimes he'd pull the gun out while we sat in his living room, listening to Tom Waits or Jacques Brel. I liked the music; I didn't like the gun waving.

Some people are raised around guns.

The rest of us aren't. 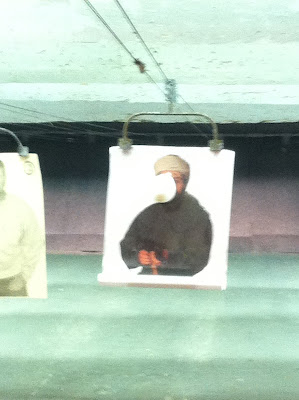 So when some of the folks at work talked about going to Target World in Sharonville, I decided to join them.

I'm a sucker for adventure and have long said I'll try almost anything once. In this case, it meant overcoming a personal fear and a family hesitation.

After getting over the initial shock of rounds popping in the firing range, I creeped toward the bay and started with the Glock.

One of my colleagues then blew up a small balloon for me to aim toward. I popped it on my first try with the .22, and again with the Uzi (which was a single-shot version, as opposed to the fully automatic machine gun variety popular in Hollywood).

It turns out I have excellent aim. 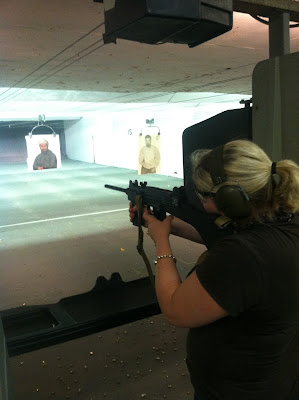 The .22 was probably my "favorite" gun (ed note: that statement sounds like an oxymoron out of my mouth), followed by the Uzi and the .45.

The Glock was my least favorite firearm; my colleague calls it The Dragon because it has two streams of fire coming out of the barrel. The feature is supposed to help you keep the gun focused on the target as the round is fired. 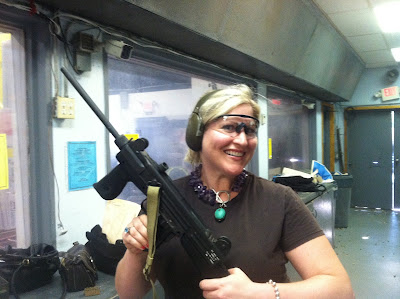 Mama Grizzly, Who?
Several people warned me about the Uzi, saying my shoulder would be sore the next day. It certainly had a bit of kick back, but it wasn't nearly as forceful as I anticipated.

The handling of these weapons is serious business, and I had utmost respect for both the firearms and the people around me. I was always a bit nervous when I clicked off the safety and held the gun in my hands, but then I'd stare at the target, look through the scope, and forcefully pull the trigger. 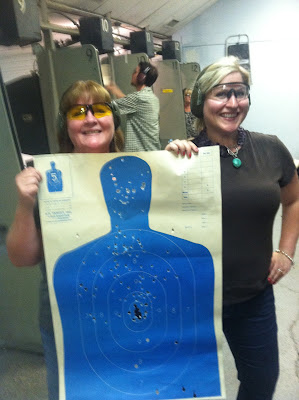 My kick-ass colleague MP and me
The next morning, several folks in the office asked if I was in the market to buy a gun. I'll admit, they do provide a rush, but I'm not running out to get a Smith & Wesson.

I'll stick with my safety whistle... I know this displeases some of you.

Kate's Random Musings by Kate the Great is licensed under a Creative Commons Attribution-Noncommercial-No Derivative Works 3.0 United States License.
at 6:41:00 AM

Email ThisBlogThis!Share to TwitterShare to FacebookShare to Pinterest
Labels: gun shooting, guns, out and about

If you want to try out my 38 special, we can always go to shooters supply in Kentucky! I need to practice anyway. Glad you tried something new, I felt the same way up at Target World my first time. It can be pretty intimidating.