Spend any time in the Big Apple and you will likely have a moment when you exclaim, "Only in New York."

A visit to the McKittrick Hotel will certainly prove to be one of those moments.

This old hotel in Chelsea was built by a wealthy family right before World War II. The war kept its doors shut, forcing the grand McKittrick to sit dormant for years.

Rich damask wallpaper, beautiful woodwork and velvet-upholstered furniture - the luxury hotel was locked up and  sentenced to a long, quiet slumber.

More than 70 years after its near-opening, the McKittrick is alive and well with a live, choose-your-own-adventure theatrical experience by London's Punchdrunk, an immersive theatre concept.

Guests are asked to check their coats and handbags upon entering the hotel. The coat check attendant gives you a playing card (ours were the Ace of Hearts) and you're ushered into a bluesy, speakeasy type space with two cash bars. The staff is decked out in period wear - flapper-era costumes, timeless tuxedos.

We ordered a couple champagne cocktails and surveyed the dimly lit scene. Every guest was given a white mask - it fitted our faces around the eyes but jutted out in front of the mouth like a beak.

The "Ace of Hearts" group was taken to an elevator where a gentleman served as host, giving a cursory explainer about the hotel. He told us to keep our eyes open, follow things that interested us, and explore to our hearts' content.

(Side note: guests aren't allowed to talk to each other or touch the performers. This former point was a bit of a challenge when trying to stay together.)

The entire evening presented wildly dramatic scenes transpiring on several floors. Provocative, threatening, seductive - the silent Shakespearian drama included a cast of characters who floated amidst all of the hotel's levels.

And the rest of us followed - or chased - the action wearing our creepy, white masks.

During the three-hour production, guests are able to take a break and return to the speakeasy lounge to enjoy cash bar cocktails and hot jazz. Several unassuming, black masked guides can point you in the right direction if you can't find your way.

The scenes repeat themselves over time, giving you the chance to follow one actor the first time, and the other during a repeat execution. There's always a subtle nuance to catch or another interaction to witness.

Tickets are around $100 per person and completely worth it. The evening has several "seatings" - our late night show allowed people in as early as 11 pm and concluded at 2 am. If you go, I suggest an earlier time to allow you to catch as much action as possible.

And if you get invited on a private, solo adventure, do not hesitate - it alone is worth the price of admission. 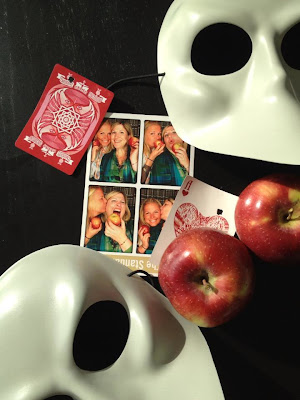 For more information: Sleep No More and ticketing.