Ever the fan of funny typos in the newspaper and silly errors on television - I had to share this screen shot from a Georgia television station.

I don't know what the story was about - other than it involved Krispy Kreme's wheat doughnut.

Apparently whomever snagged that KK logo from Google didn't look closely at the fine print. 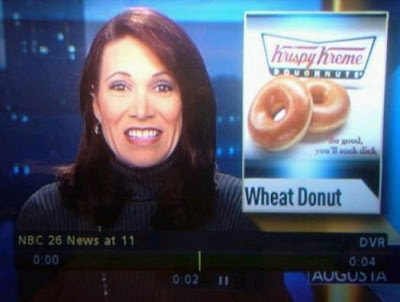 That fine print will always burn you.

Wow... I never laugh out loud, but I totally just did. This is HILARIOUS!

SECOND thought was, "no, they really aren't that good."

Thanks for the laugh.

I totally just stole that picture.

Uh, they did mispell doughnut - I guess a more simplified spelling. But it is correct that all doughnuts are wheat. White flour is made from bleached, enriched, wheat flour. I am very allergic to wheat (I have Celiac and gluten intolerant). I love it when I order food and ask if there's any wheat in an item. They'll say, there's no wheat in it, it's just flour . . . For crying out loud!