A line is always a good thing - at least where bakeries are concerned.

Sure, they royally suck at the airline's ticketing counter and at the DMV, but when you saunter up to a door to get a croissant and discover a line of 15 people waiting - you know you're in the right place.

I had some solo time in San Francisco, so I grabbed an umbrella from the concierge and hopped on a bus headed for the Mission District.

The Mission is one of the more gritty neighborhoods in SF; it's home to a large Latino community and experienced gentrification in the 1990s and 2000s. People flock here to sample the San Francisco style burrito, and apparently also Tartine Bakery.

I strolled up to the corner of 18th and Guerrero St. and found a line of people out the door and standing beneath the scaffolding outside the building. I stood in queue, waiting to see what all the buzz was about.

The buzz is likely in part because of a glowing write up by former New York Times food writer Mark Bittman. He said it was his favorite bakery in the United States, which is a pretty amazing statement coming from a man surrounded by Magnolia, Bouchon and dozens of other Big Apple bakeries.

I stood behind a distinguished man in a tweed coat, waiting to inch closer to the doorway and a stack of laminated menus. Once there, it took me forever to decide. Pressed sandwich? A couple of the many breakfast pastries? Quiche? A Croque Monsieur?

Making decisions can be difficult, especially when your stomach's growling and you're just a few people away from carbohydrate heaven.

I went whole hog and ordered a Pecorino and Almond pressed sandwich - made with sheep milk cheese, with almonds crushed with olive oil, lemon and sage. I asked the gal at the counter to throw in a croissant, a double pain au chocolat and a morning bun.

Number in hand (actually, it was the letter "I"), I grabbed a cup of coffee from the self-serve station while waiting for my package. The half-and-half and skim milk were out, but the canister with soy milk was filled to the brim.

I am so not a soy person, but I've got to say, it didn't taste that bad.


The clerk came by with my pressed sandwich, and I popped it in my bag and decided to hit the road since I couldn't find a single vacant chair in the place to claim as my own.

Thrusting my umbrella open, I set out for Dolores Park, hoping there was a tall tree I could crouch under and avoid the rain while eating my sandwich.

The sandwich (I was surprised to find three halves in the to-go box) was spectacular. The cheese held the bread and crushed almonds together, but its flavor didn't overpower the sandwich laced with fresh lemon and sage. 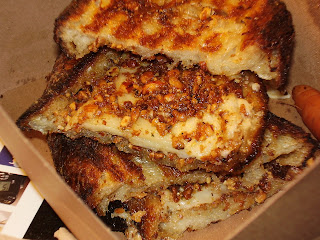 Sadly, ours was a trip of extreme eating, and I never got to finish the sandwich. We noshed on the breakfast items the following morning - I loved the chocolate croissant, but Wingman said he thought the plain version was a bit burnt.

Kate's Random Musings by Kate the Great is licensed under a Creative Commons Attribution-Noncommercial-No Derivative Works 3.0 United States License.
at 8:00:00 AM

That sandwich looks divine! You're making me hungry. :)

Tartine is, indeed, a scrumptious place. I've been able to sit down and relax there only once (because it's always so busy), and the parking is hopeless (usually there's a spot somewhere alongside Delores Park), but the food is usually worth it. Frankly, I don't think the chocolate croissants are among the best things they make. It's the almond croissants at Tartine that are second to none, and I'm a complete sucker for their coconut tarts and their lemon tarts.

The other bakery I know of in San Francisco that has a permanent line in front of it is Arizmendi Bakery, which is on Ninth Ave., between Irving and Judah. A different ambience altogether, but the muffins are excellent, and many people say their pizzas are tops, although I've only been there in the early morning. Unfortunately, they have no conception of what a good coffee or other morning drink is about, but if you're looking for great muffins to eat on the run, try Arizmendi. For a sit-down breakfast in that neighborhood, try Park Chow--excellent eggs benedict.

Right around the corner from Tartine is a good little deli, by the way, called Bi-Rite Market, on 18th Street, between Dolores and Guerrero. This post of yours caught my eye because a few days ago I had just written about that place and about Tartine on my own blog. Small world.