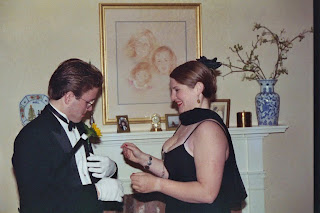 Tails, spats and even a cane, my prom date appeared better suited for the life of a gambler/dandy or dancing Puttin' on the Ritz with Fred Astaire (or even Gene Wilder and Peter Boyle).

Spring was erupting with much fanfare in Connecticut, circa 1995, and that meant every boutonnière and corsage was adorned with sunflowers or white roses. Sunflowers everywhere! My date was no exception.

Jason normally drove a black Jetta, but was compelled for some reason to borrow a massive Lincoln Towncar for the trip from our shoreline hometown to a place up I-91, halfway between New Haven and Hartford.

I had no idea where we were going; my exploration behind the wheel was mostly confined to Boston Post Road between Common Grounds in Branford and the movie theater in Old Saybrook.

For those of you readers not from the Shoreline, that's a 24-mile stretch of road. 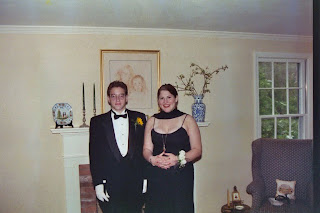 Jason was an interesting guy. Of Italian descent, he shared animated stories of him and his grandmother making homemade pasta together during Christmas break.

He regaled us with tales of doing odd jobs for his uncle that involved mysterious tasks and cash payments.

We always teased that Jason was in the Mafia. He never denied it - but I think it was only because it gave his AP-everything persona a bit of mystery.

My prom dress is still hanging in my closet. Black, empire waist gown with spaghetti straps - it is timeless, and I fully intend on losing enough weight to wear it someday, maybe even to a reunion.

How very Peggy Sue Got Married.

It was the first dress I ever wore that showed off my cleavage. I was so insecure about my physique back then; I had no idea women were envious of my God given gift. (Editor's note: is it really a gift?)

Likewise, I was not aware of the gift of growing up in a family that could afford my $95 prom ticket (Class of '95 = $95 prom ticket. Cute? Maybe. Overpriced? Definitely), dress, shoes and other necessities appropriate for this teen coming of age ritual.

Yes, I had a job appropriate of a high school student. I waited tables at a restaurant along the water, saving my pennies for outings to the afore mentioned coffeehouse and Reverse Fit jeans at the GAP. I don't think I was grateful my parents stepped up and bought me yearbooks, cap and gown and the other rites-of-passage accessories.

Now that I know how much a utility bill costs, I am doubly grateful.

So many teens face hardships these days - uncomfortable experiences I can't even fathom at my sage age of 33. I will admit, I was pretty sheltered in my early years - it has taken careers in broadcast television and human services to shed light on the needs that are so prevalent in our community.

Some girls don't even have the means to buy a pretty prom dress.

Sure, some folks may write off prom as frivolous, expensive, even decadent. But really, it's not so much about the gown, the limo ride, the booty dancing on the floor - it's about the opportunity to create a memory that much of the rest of society can share.

Whether I am at a Connecticut country club, an Akron office building or a rodeo in Tulsa, chances are most people I meet will be able to identify with the experience of "prom."

Kenzie's Closet is a one-stop-shop that provides prom dresses and related accessories to local girls who can't afford them, allowing teens to attend their big dance, regardless of their family's financial limitations.

I loved this blog post of you talking about your prom. It made me think back to my prom. Oh the memories. :)

Is it a gift? My wife has a similar "gift," and she'd say it's a blessing and a curse. Which outweighs the other depends on what day you ask her.

I love the fact that you posted this. I am not in the Cincinnati area but it made me remember the bag in the closet. It has been there for two years wondering where I can send it. I googled and found a place in my neck to donate.

Thanks, and I am gifted as well. Sometimes, i wonder.