When Mariah Carey pleaded, "Wrestle me around, play with me some more," I don't think she was envisioning this guy: 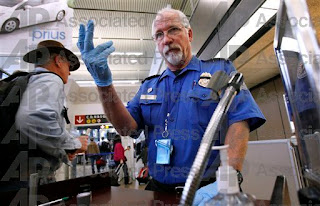 In case you can't see the watermark everywhere, this photo is from the AP.
Okay, so this latest Transportation Security Administration drama has everybody's panties in a knot, if for no other reason than the manhandling in the security line at your nearest airport.

Today is one of the biggest travel days of the year, and every air traveler around has heard about the new pat down technique administered to people taking to the friendly skies. These more invasive techniques arose after people began refusing to go through the "backscatter" full body scans that create images of your essentially nude self.

Tales of full breast cupping, vaginal probing and "junk" manhandling have erupted in connection with the more "thorough" pat down technique.

Some of the stories sound too absurd, insensitive or offensive to be true. But they are. Take note:

A woman was asked to remove her prosthetic breast from her bra during a pat down.

A video has been circulating for several days showing a small child experiencing a pat down at an airport in Salt Lake City. The TSA has come out saying the boy's father was present the entire time and that he hasn't filed a complaint.

A Cincinnati traveler managed to return to American soil from overseas without submitting to either invasive scan or pat down. He was, however, escorted out of the airport by 15 TSA agents, police and other authorities.

Earlier this month, a 31-year-old traveler told a San Diego TSA worker, "If you touch my junk, I'm going to have you arrested."

I don't know about you, but I typically only prefer body fondling after a good date and a glass of wine or two. 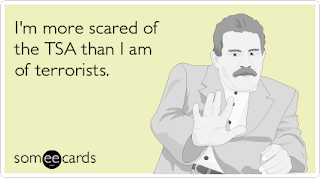 So many travelers have expressed frustration about the new, extreme security measures, and have said they plan to muck up the system with a demonstration "National Opt-Out Day" today. The movement is an attempt to tell lawmakers and other officials that law abiding citizens do not deserve to be subjected to these invasive scanners and extreme pat downs.

The demonstration will likely lead to big delays at the nation's busiest airports, as a scan only takes a few seconds, but a detailed pat down takes about two minutes.

And not in a touchy-feely way.

The thing is, we are Americans. Our nation's citizens have enjoyed special liberties and freedoms for over 234 years. We have a Constitution and Bill of Rights that protect us from improper search and seizure. Our citizens have a reasonable expectation of being considered innocent until proven guilty and are afforded the right of due process.

We just can't go around feelin' people up to make sure they're not carrying explosive devices between their labia.

There. I said it.

We're putting our rights and privileges aside for the sake of extreme tactics in the war on terrorism. The dramatic change to our peace and civility in an affront to basic American standards and we must search for better, less offensive ways to safely screen air travelers.

Because, like I said, I only invite people to touch my body when a little romance is involved.

Kate's Random Musings by Kate the Great is licensed under a Creative Commons Attribution-Noncommercial-No Derivative Works 3.0 United States License.
at 10:40:00 AM

It's a hot button issue, and for the record, I don't think you're wrong about how poorly we're handling it. (I couldn't care less who sees my backscatter, but I understand the complaint none the less) I've read in couple of places that Israel uses far less, erm, "invasive" techniques (just dogs and interviewing passengers, from what I understand) and they seem to get by OK. Couple that with the fact that, when you think about it, airports and their security already posed a pretty unattractive target to terrorists who are already here (in terms of risk vs "reward"; there are many more appealing targets), and I think it becomes pretty apparent that the TSA is overdoing it.

Where did you get that photo?

I couldn't have said it better.

Alright you guys, settle down. LOL

There are those crazy people that work for TSA that need to be fired just like with any job. One of the first times that I went through the "new" procedures, the woman rammed her hand up my thigh and into my crotch! Ouch, you bitch! Other than that, it's actually not that bad, a lot LESS invasive than people are giving them credit for and much quicker than needing to wanded and then pat down.

As far as the backscatter. GET OVER IT! The pictures (at least at CVG) are not as "clear" as they show on television. Plus, it's one person in a room who doesn't know who you are, your name or what you look like. Nor, do they care. This machine is just as it says a back scatter, meaning it's not like the one at the doctor, it scatters the rays in different patterns depending on what it encounters, ie metal objects. If it only hits skin or fabric, it's very fuzzy.

I am a flight attendant with a knee replacement and have been through back scatters, "old" pat downs and "new" pat downs all over the country every time I have to go through security. And, I'm in uniform! Imagine that one.

Does it make it right? No, not necessarily. I think that TSA is focused on preventing the past by what happened in the past and not what they could be doing to harm us in the future. As far as the flight attendant with the prosthetic and that little boy. Those are examples of a class action law suit waiting to happen and need to be fired. They know better.

Remember one thing though. Those crazy bastards over there use women and children for their dirty work and suicides. So.....

It's all very expensive and pointless theatre.