The air is brisk, the trees are on fire and the sunlight is waning.

The seasonal chill has brought with it the occasional eruption of coughing, sneezing and a bevy of other ailments that can only be chased away by a few double shots of DayQuil or a hot bowl of soup.

I found the latter at Pho Lang Thang, the latest business to fling open its doors at Findlay Market in Cincinnati's Over-the-Rhine neighborhood.

Excited about the prospect of sinking my teeth into some Vietnamese offerings, I originally had my heart set on a Banh Mi sandwich, a traditional mix of pork, pickled carrots, cilantro, spicy mayo served atop a French baguette.

History Lesson: Vietnamese food features some French influences because of the country's colonization by the European nation in the late 1800s. Most dishes also hold on to traditional Cantonese overtones because of Vietnam's influence by southern Chinese immigrants.

A long and lingering look at the banh mi and I was almost sold, that is until I noticed the massive bowls of soup that other diners were slurping up attentively.

My sore throat and chilly fingers knew they'd found their panacea - a big bowl of Pho Ga (pronounced fuh-ga), or tender cooked chicken with noodles and onions, served with sidecar plate of garnishes including jalapeno slices, lime wedges and sprouts.﻿ 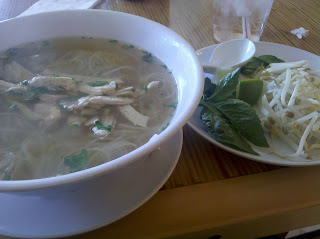 I dumped every bit of garnish on that side plate into the hot bowl, its steam billowing from imaginary smoke stacks. I drizzled some beloved sriracha in the soup for added kick, hoping heat of two varieties would soothe my ailments. 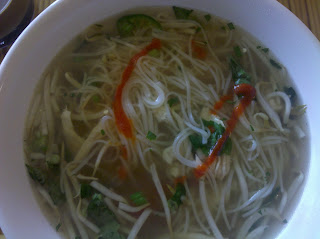 The soup and its many noodles and other flavors filled me up quickly and was perfectly complimented by a warm cup of Vietnamese coffee, complete with the traditional condensed milk. 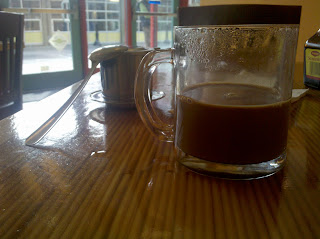 In retrospect, I am kind of bummed I didn't grab a banh mi sandwich to go. I've had banh mi locally, but the best Vietnamese sandwich I've ever had was at Saigon Sandwich in San Francisco. It was billed as the city's best sandwich in 2007.

They've only been open for a week and I've gotten the banh mi twice. It is unbelievably good. I have tried the beef & the pork - both awesome and affordable. Make sure you throw some Maggi sauce on it.

Thanks! I can't wait to check it out. We love Vietnamese food and have been to a place on the West side that's a bit of a drive. So it's nice to have a place close by that got good ratings.

you should try bun bo hue.... its sooo good if you like spicy.