India's beauty is seen not in its vibrant colors, but in the determination of its people.

Yes, the brightly colored saris and kurtas are arresting in their beauty. 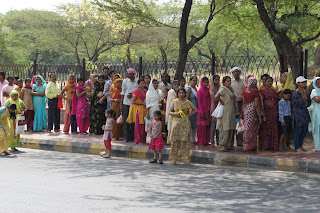 A line of visitors waiting to see the The Bahá'í House of Worship, or Lotus Temple
Everywhere we turned, the people of India - not just the women - dazzled us with flourishes of technicolor textile. But what is most disarming is their ability to persevere in the face of adversity.

Within 24 hours of landing in Delhi, I was simultaneously overcome by a feeling of profound gratitude: Wow, we have so much! and feelings of self loathing and disgust: Wow. We have so much.

Everywhere you look, it is easy to spot abject poverty and complete despair. And for some of these people, it's a cycle they can never break.

India's culture is weighed down by a caste system - a defined, iron clad rule of class. Developed in ancient times, the archaic standards establish communities of class based on hereditary or ancestral groups.

Basically, you are born into a line of Brahmins (the scholars and teachers) or Kshatriyas (the kings, warriors and administrators), or you're not.

It's a complicated system that is defined by blood line, faith and other dynamics, and essentially inhibits an individual's ability to become a Self Made Man and rise above the standards set in place. 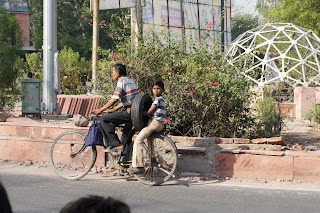 Because of these defined groups, the wealth appears to be concentrated within a minuscule minority. India has a handful of wealthy people, and everybody else is poor, poor, poor.

In fact, India's middle class only makes up about five percent of the current population, though the nation is becoming industrialized and that number is expected to increase to about 40 percent in the next 20 years.

For perspective, different class models show the American middle class currently makes up between 25 and 60 percent of the nation's population.

When you visit India, poverty is all around you. It's quite different than America, where you need to drive to specific inner city blocks or rural roads to come face to face with it.

The poverty is jarring and disheartening. 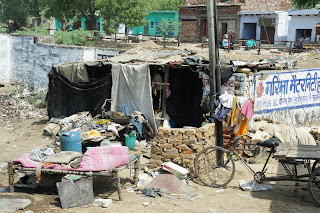 It's quite normal to see hackneyed huts or shelters assembled along well traveled roads that pass through dusty, Indian towns.

The photo above is a man's home, and the wooden structure with the pink cover is a makeshift lounger. When I saw it, I thought of it as a front porch of sorts, allowing the man to recline as he watched the world go by.

When traveling in India, you get used to these scenes. 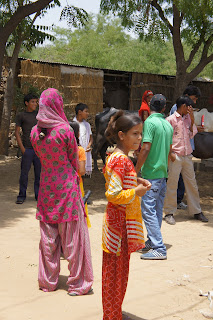 My favorite stop on the entire trip involved a village outside of Jaipur. I'll share a lot more about this village in a future post, but what I was predominantly struck by was how little these people had, and yet how happy they were to have it.

They were a group of over a hundred and they lived in structures that shared common walls. They cooked in shallow pits in the dirt. They owned two American cows which produced milk they sold to a dairy (side note: Indian cows are typically not used for milk, though Indians believe it is good to drink their urine.)

This group of people had so little, compared to American standards.

And yet they were gracious hosts, freely inviting us into their homes. They eagerly displayed how they earn money and the vastness of their farmland. The women offered warm smiles and respectful nods. The men were proud, honest and optimistic.

The villagers had peace, happiness and the purest of spirits.

And you can't put a price on those gifts.

Kate's Random Musings by Kate the Great is licensed under a Creative Commons Attribution-Noncommercial-No Derivative Works 3.0 United States License.
at 7:56:00 AM

Email ThisBlogThis!Share to TwitterShare to FacebookShare to Pinterest
Labels: India