I am clutching a baby and running for our lives.

Through dusky city streets and neighborhoods, I run. My feet pound the asphalt while I clutch this child, my head whipping around to see if they're still chasing us in the dark.

Never, during the course of the dream, did I figure out who exactly was chasing us. I only remember a strong conviction to protect the baby.

And whose baby? I have no idea.

The dream ended abruptly, my heart pounding and my head racing with concern and need to protect an imaginary baby.

The haze cleared and I remembered reality - I don't have a baby, and nobody is trying to take one away from me. Once I settled back into the circumstances of my universe, I began considering the underlying meaning of such a subconscious fantasy.

Rather than instantly consider the obvious, I decided to follow a friend's suggestion and explore an online dream dictionary, which explained babies in dreams symbolize innocence, warmth and new beginnings. The chasing supposedly means the dreamer is avoiding a situation that is not believed to be conquerable.

Someone else suggested perhaps I am striving to fiercely protect an idea, dream or project, despite criticism and the absence of support.

A high school acquaintance said the dream means I'm ready to be a mom.

The remainder of the comments underscored that sentiment - and I can't say I disagree with the philosophy. It was the obvious conclusion to draw, but I sure as hell wanted to consider the possibility of alternate meanings.

The fact is, I think I am ready to be a mom and wife, but perhaps the universe isn't ready for me.

And it's during these feelings of frustration and mild disappointment that I lean on my faith and strong conviction that patience is a virtue with spectacular rewards.

I guess these dreams are appropriate for a woman of my age. Many 30-something gals tend to hear their biological clock at some point during this decade. Some of us have the ability to make good on that physical and emotional yearning, some of us don't.

Worst case scenario - I just may have a baby on my own. It's a drastic but admirable adventure to embark on alone, and something I wouldn't do without serious thought. Becoming a single mom is a prospect I'd likely entertain in my 40s; I'm still quite young and well aware of how quickly life can change.

Until then, I'm going to keep the faith and be the best damn aunt I can be.

That is one reality I am relishing. 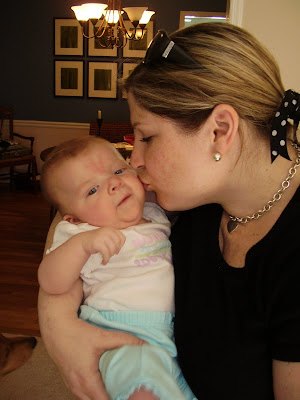 Kate's Random Musings by Kate the Great is licensed under a Creative Commons Attribution-Noncommercial-No Derivative Works 3.0 United States License.
at 12:46:00 AM