Splayed out on the couch like a beached whale, I decided it was time to get something to eat.

My hangover headache had my synapses bouncing overtime - Do I want Fatburger? How 'bout Subway? Mio's? I was torn between getting my act together and hitting the road for a bite from a neighborhood establishment or calling a benevolent place that offered delivery.

Mouth watering, I perused no less than 10 restaurant websites, weighing price points and palate payoff factors. After about 30 minutes of delay, I decided to go with the walkable, ol' neighborhood standby, Dewey's.

I started my meal with a side salad - the seasonal Strawberry and Macadamia Nut variety, including a mix of field greens, blue cheese and a raspberry poppy seed vinaigrette. 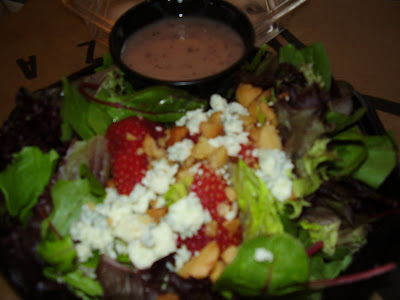 As I recall (I was so famished I inhaled this course), the salad included four or five strawberry halves. They burst with the classic flavor of summer, but were a bit soft around the edges, implying they'd been washed and cut hours ago during morning prep. No matter, the rest of the salad worked - the macadamia nuts were a great surprise - crunchy, salty and a perfect balance to the Maytag bleu cheese. I wasn't a fan of the dressing. It was thick and creamy - I'm guessing it was bottled and made thick by the emulsifiers added to prevent separation of oil and vinegar.

On to the pie.

Now, Dewey's Edgar Allen Poe pizza is my absolute favorite 'za. The conglomeration of kalamata olives, massive, whole clove roasted garlic, feta, mushrooms and chunky diced tomatoes is nirvana on a crust, and I order it every. damn. time. - even though the scent of garlic pours out of my pores for a good 24 to 36 hours after ingestion. 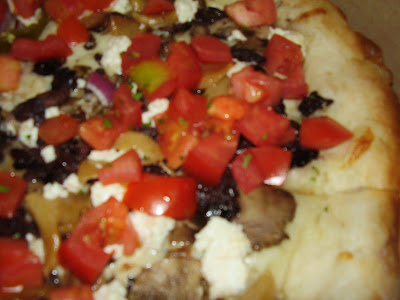 Tonight's offering was a great way to get intimate with Poe. The tomatoes are placed on the pizza after the bake, ripe and juicy jewels and an ace pairing with the goat cheese and it's more chalky tones. I devoured my slice in minutes, savoring the soft roasted garlic cloves and the punchy burst of the kalamata olives.

But what of the other half of the pizza?

Firmly believing variety is the spice of life, and I hemmed and hawed over whether I'd order half Poe half Green Lantern or Socrates' Revenge. Instead, I selected the seasonal variety, Dr. Dre, complete with peppers, onions, chicken, bacon, jalapeno peppers, tomatoes and a side of parmesan peppercorn ranch dressing. 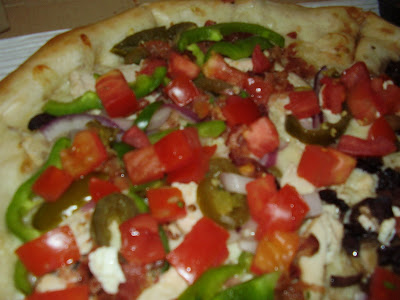 I was a bit hesitant about the jalapeno peppers, wondering how they'd sit in my somewhat delicate stomach (also brought on by last night's debauchery), but decided to order this variety as planned by the good folks at Dewey's. The Amish chicken was tender and juicy, and the little salty bits of bacon gave this pizza a complex set of flavors. Rather than drizzle the dressing on top of my slices, I dipped my crust into the ranch dressing, surprised by how much I liked it's flavor.

The folks at Dewey's know good pizza, and they also know good customer service. At 5:15, the Oakley dining room was already packed, a fleet of servers zipping around and taking care of tables full of families and couples. I stood at the register, waiting a few more minutes for my take-out order, enjoying the views of the glassed-in kitchen. One of the hostesses asked me if I wanted a compliamentary soda while I waited for my pizza, and later offered paper plates, napkins and plastic flatware for my to-go order.

I didn't have the guts to tell her I was taking the pizza home to dine solo.

At least I don't have to share the leftovers.