Chicago made me fat.

Okay, that's not really true - but the long weekend certainly stretched my stomach's capacity where ingestion is concerned.

Sunday was not an exception to the rule.

My BlogHer pal, Red Kat Blonde, had called up an old colleague who relocated to Chicago to see if we could catch a ride with her and crash until our 10 pm bus rolled out of town, bound for Cincinnati.

Digi was kind enough to spin by the Sheraton, toss our massive, swag filled bags into her uber quiet Prius, and whisk us off to Andersonville. This little, Swedish themed village is just north of Downtown Chicago, accessible by the Red Line, bus and Metra.

We made it to Digi's apartment, dropped off the bags, and decided to take a stroll to the heart of the village - Destination: Anywhere (that served coffee).

Our trio ended up stepping into Ann Sather's.

I was stuffed to the gills after Red Kat and I enjoyed our daily, massive breakfast at the hotel, so I was only hoping for a strong cup of coffee at the yellow and blue painted restaurant (5207 N. Clark St., Andersonville). Digi derailed those plans when she told me about Ann Sather's reputation involving cinnamon rolls.

Apparently Ann Sather made a deal with the devil.

Maybe she sold her soul, maybe she gave away her first born. Whatever the case, Ann must have dished out some hard ball when negotiating with Lucifer, because those rolls were sinful. 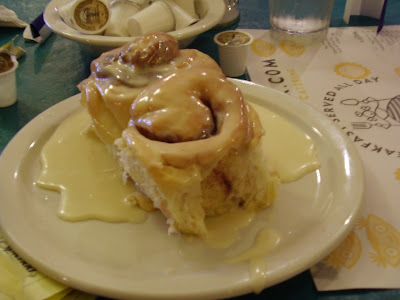 Not only was the roll bathed in cinnamon, the confection practically swam in a sea of buttery icing - an icing so sweet I was compelled to practically lap up every drop with a swath of roll. The cinnamon rolls, by the way, were fresh, warm and everything you'd expect from a roll made earlier that morning.

The coffee was strong, hot, and a perfect jolt to my otherwise exhausted system.

Save for a bite of Red Kat's Limpa Rye bread (a salted rye bread that I liked, even though I'm not really a Rye kind of girl), I didn't get to try anything else at Anna Sather.

Like I said, I couldn't find any more room in my stomach - it was a first for the weekend.

Kate's Random Musings by Kate the Great is licensed under a Creative Commons Attribution-Noncommercial-No Derivative Works 3.0 United States License.
at 8:10:00 AM

Wow, that danish looks absolutely spectacular. To die for...

I have a special place in my brain reserved for the taste sensation that is Ann Sather's apple sauce. It's just so different. Not very saucy at all really - just thinly sliced apples in a syrup.

Now I wish I had the Cinnamon Rolls though...

Honey, oh honey, I should have warned you. Ann Sather is but a few blocks from my house. I walk past it daily. Scratch that: I walk past it WITH GREAT EFFORT daily. The only thing that improves those cinnamon buns is a side of bacon. Oh, and since they are evil, they serve them AS THE BREAD BASKET even if you go for DINNER. Nom nom.

I used to live several blocks from an Ann Sathers as well. I walked there for breakfast in the Chicago winter. If that isn't an endorsement I don't know what is.

Ann Sather is the best. Cinnabon is not fit to scrape up the leavings of an AS cinnamon roll. Thank goodness I didn't know how high my cholesterol was when I still lived in Chicago.

Tack mycket for mentioning my lowly limpa rye toast in this delicious hommage to the cinnamon roll. One bite was all it took for me to swear off them forever...my thighs can't take it!