Every celebration deserves some sweets, yes?

I have had cupcakes on the brain ever since I settled on two beauties from Magnolia Bakery in New York.

I know, I know. Everyone knows about Magnolia.

The Manhattan bakery was heralded in an SNL video and made a cameo in SATC. Other movie credits include The Devil Wears Prada, and Prime.

I get it. You know about Magnolia.

But did you know Grand Central Terminal has its very own Magnolia cupcake? A version they don't sell anywhere else? 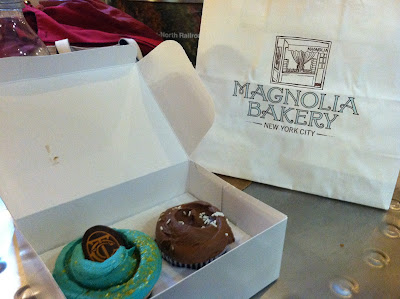 I scored the Grand Central version because, well, when in Rome the train station, right? And of course I had to snag the iconic chocolate-chocolate duo. 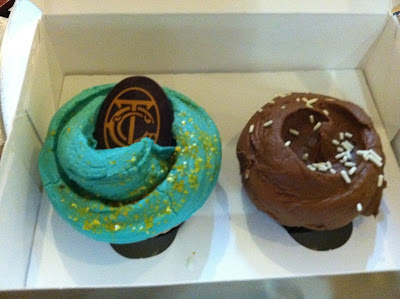 The chocolate cupcake is a sweet as can be, punctuated with white sprinkles, or jimmies, as they're called in New England (of which, New York is not). 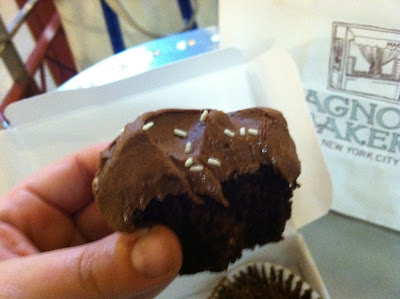 The chocolate cake. Incredibly rich, moist and quite decadent for a Monday afternoon. But it was phenomenal and worth every damn calorie I had to work off running the next day. 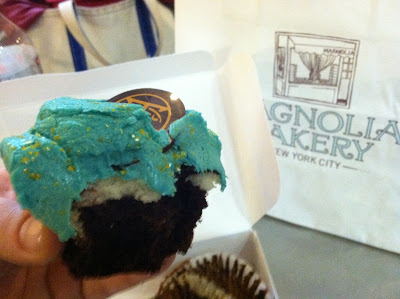 The Grand Central. it was good, but man, that thing was icing overload. Something about eating food that bears colors not seen in nature... for the life of me, I could not get over the icing. I felt like I was eating a jaundiced Smurf.

I pretty much pitched the cupcake after I took the above photo.

The cupcake craving continues... Jenn Hardin of Cinsational Sweet Treats is making me some cupcakes for my looming birthday (she even has a "Katy Cupcake," my beloved chocolate cake with peanut butter frosting!)

What size was Marie Antoinette, again?

Kate's Random Musings by Kate the Great is licensed under a Creative Commons Attribution-Noncommercial-No Derivative Works 3.0 United States License.
at 7:30:00 AM