Riding In Limos With Girls 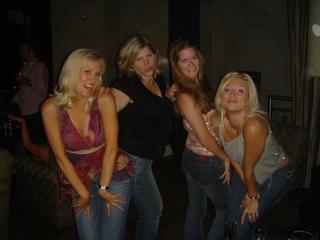 Thanks to Micah for this fabulous photo of his Shadow Dancers. Check his own blog for
other Vegas details.

Las Vegas is a great place to feel a little bit like a celebrity.

From all the glamorous clothing to the incredible bling (by the way, did y'all know apparently it's very out to say "bling bling", whereas a single "bling" is okay?), everyone looks just so sensational there, including yours truly.

My girls and I (in the picture l to r: MacBoob, me, Nik and D Money) decided to use our little excursion to Sin City to live large.

Saturday we spent several hours out by the pool, laying in our bikinis while sipping on incredible frozen drinks and checking out the merchandise. I was especially fond of the two, buff Italian twins we saw cruising the pools (Haven't I mentioned them already? They're worth a second plug). We also chatted up a table of chaps from Jolly Old England, all with some great tattoos and sexy accents. Who knew I would go for the Inked type.

After the most luxurious meal I've ever eaten in my life which says a lot considering I've had a privileged upbringing and am a huge foodie (details coming soon), we decided to take a limo ride around The Strip.

The four of us piled in the stretch at 10 pm. The driver was all ours for an hour, and we wanted to see the sights. We cruised down the strip southbound until we made it to the hallowed Las Vegas sign for pictures. Along the way we sipped on fine champagne, raised the privacy partition and cranked up the stereo to jam to hip hop music.

We all hopped around the six seats in the back, taking turns at the different vantage points. Being the loud one in the group, I felt obligated every once in a while to lower the tinted window and yell a "Woooo hooo!" to the passers by. At one point XXXXXX felt so inclined to flash the cars driving by, and that's when we got wrangled in with a car that followed us for a good couple miles, hoping they'd get another glimpse at glory.

We took a the limo to The Palms to get in to Ghost Bar and Rain. One of us girls has a connection to the Maloof brothers, so we were able to slink by the quarter mile long lines, the velvet ropes and the registers to get in as VIPs for free. Paris Hilton was there. Really she was. D Money and I were hanging in the limo when we got there and missed her, but MacBoob and Nik caught a glimpse as Paris was walking out, cell phone flipped open and sunglasses on. At 11 pm.

When we made it up to Ghost Bar, we were treated to one of the hippest drinking scenes I've ever seen. FHM was having a private party off to the side where I caught a look at the newly divorced Jenny McCarthy. We went out to the patio and I was more than a bit cautious as I stepped on the super thick pane of glass 55 floors up, but I had to do it for posterity's sake.

We moved on to Rain, again bypassing all the lines and getting a personal usher into the club by one of the very attractive (and very buff) bouncers, complete with sexy black suit.

Once inside Rain, I could feel the heat coming off the fireballs exploding out of the lighting system above. There was a crazy, twisty network of layers circling the dance floor and the perimeter, and our little neon VIP bands got us just about everywhere we wanted to go. Well, except for the six or so private rooms you could rent out in exchange for the Hope diamond or your first born.

All in all, we were living a tricked out lifetyle of luxury, and I loved every minute of it.

You stole my pic! That's my favorite one from the trip, next to the "Mama Mia!" one. Hot chix!