Women can pee while standing if they're really determined.

That was my first thought after watching a particular scene in The Full Monty. In the movie, a woman bets a man that she can pee standing up. She walks up to a urinal, unzips her jeans and goes to town. A man walks out of the Men's Room exclaiming, "They're gonna take over the world!"

That's quite possible buddy, but how we pee has no bearing on it.

I remember an old co-worker of mine, a former TV anchor in Lexington, telling me about a related conversation she had while sitting at the anchor desk. Apparently, the chief meteorologist at the time told her that women can pee standing up based on a special technique involving the positioning of one's hands. I was amazed this conversation actually unfolded at the anchor desk, but I was even more amazed about the content of the discussion.

A hand gesture can help a woman pee standing up.

I mean, this could be relevant when camping or hiking, when faced with the prospect of a dirty portolet or gas station. What a fascinating concept. And yet, something I will likely never entertain.

And then I discovered the Go Girl.

The Go Girl folks handed out samples at BlogHer, and I managed to snag one. It's a latex, molded device that helps a woman pee while standing, thanks to its handy, ergonomic funnel design. 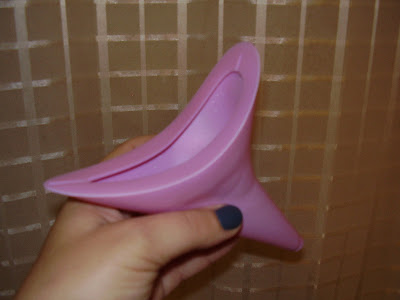 The company recommends new users test it out in the shower, so that's exactly what I did. Users are supposed to form a tight seal with the body to ensure there's no leakage. When I tried it out, it worked well enough for me to appreciate its value in the real world.

Each device comes with a tissue and plastic bag for disposal or transporting before cleaning and reuse.

If you want to save and reuse the device, you'll have to wash it. Even though urine is sterile and the Go Girl's silicone is germ resistant, it needs to be washed to avoid developing bacteria.

You can supposedly put it in the dishwasher - but that's entirely up to you. I don't know that you'd want to wash a bathroom-related tool with your Crate and Barrel Bamboo flatware.

Have you ever been in a pee crisis? I know I peed my pantyhose at the Trocadero subway station in Paris once. A Go Girl would have been handy on that occasion.

Leave a comment about your most vivid pee crisis, and you'll be entered to win one of two Go Girl devices, courtesy of the good folks at Go Girl.

Winners will be selected at random.

The contest runs through Friday.

I've had a lot of pee crises over the years, but the last one was this summer. We were traveling to my in-laws with our 18 month old daughter; it's about a 5 hour drive. She hates the car, so long trips are no fun for anyone. Usually we stop frequently to change diapers and let her stretch her legs. But on this trip she had actually fallen asleep, which is a rare thing now days. So of course I had my usual Diet Dr Pepper, not worried about having to stop. But when we realized that she was asleep, we wanted to keep driving as long as possible. At first I pretended that I didn't have to pee. That worked about 30 minutes. Then I decided that I would just pee in a diaper, it's an easy solution, right? Except that I couldn't go! I couldn't get myself to relax enough to actually pee in the diaper. It didn't help that my hubby was laughing at me, and bet me that I wouldn't be able to do it! I made it about 90 minutes before we had to pull over so I could use the bathroom! Another gross gas station potty, yuck! I gotta get a go-girl!

Oh...the stories I could tell....being out in the middle of Lincoln County nowhere NEAR a potty with Richard in a live truck.....I still tell myself when I really need to go that I'm live in an hour and need to edit a package and somehow my bladder believes me.

When I was about 13, which is pretty much the worst age for camping, my parents decided to go to the middle of nowhere in a camper. For Thanksgiving. Here's the story (second on down, Beware of the Butterball). http://archive.cinweekly.com/blog/lastword_archive/2006_10_01_lastword_archive.asp

Well I grew up in Frankfort KY. In high school, it's a big deal to have/attend farm parties-way out in the middle of no where! As you might imagine, there's no bathroom available and as you also might imagine there's a large consumption of juice (because we were underage of course;)!)....I don't imagine peeing outside is pleasant for any girl but being one in a wheelchair adds an entirely new element. There's balancing, aiming, clothes holding, etc. to be managed-all while influenced by the juice! I endured many a pee crisis but I must say I'm thankful for the experience(s). Those go-to skills have helped me out a few times!
~Kara
P.S. It was so great to meet you today. Everyone was so nice and welcoming-I can't wait to join you again. I'll also keep a closer eye on your blog. Looks like we have alot in common.