Something's been poking my breasts lately.

Before you let your imagination run wild, I'll quell the excitement and tell you that one of my favorite bras has a wayward wire.

It's a beautiful black bra covered in hot pink, embroidered flowers. The bra was a tightly kept secret until Victoria let the cat out of the bag and shared it with me many moons ago.

Realizing that I might be in the market for a few new, beautifully crafted feats of physical architecture, I started scouting out the options.

My Atlanta-based sister tells me there's a fantastic place called Intimacy. The boutique apparently accomodates women of all sizes, whether you are proud of your grapes, or cope with something of the melon variety. This is the place that was featured in Oprah's panty intervention, so they must know what they're talking about, right? Maybe I'll give their Chicago store a whirl when I breeze in to the Windy City in September.

These bras are an investment, I'm told. Something in the ballpark of 50 or 60 bucks - a far cry from the hundreds you could spend in Paris.

It's no surprise the City of Lights is a bastion of romance and love. Parisian women have their pick when it comes to choosing dynamite delicates, including the Louise Feuillère Lingerie Shop. For a mere $450, you can pick up a cotton bra in a rainbow of vibrant colors, some covered in tulle or other lacy fabrics. The 36-year-old lingerie designer also offers luxurious bustiers, corsets, panties and other pieces, many with rare laces, velvets and silks.

I know what some of you are thinking. Why spend so much money on a garment that will spend more time on the floor than it will on a woman's body? Because it would make said woman happy, and that's the most important thing of all.

Ask any woman - a well fitting, comfortable bra can make you look thinner, perkier, and better proportioned, and that's worth its weight in gold.

I found a few interesting bra-related photos while googling for the pic at top. The photos include this unusual bra 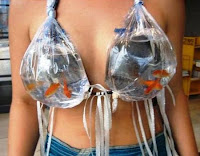 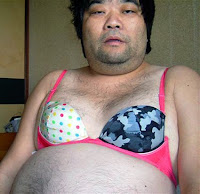 And this link to a pic of a chick in a bra made out of bacon. None of these pics celebrate bras I'm interested in wearing.

Kate's Random Musings by Kate the Great is licensed under a Creative Commons Attribution-Noncommercial-No Derivative Works 3.0 United States License.
at 8:30:00 AM