I am the Catholic girl who has always secretly wanted to be Jewish.

Who knows when it developed - I think it may have been a combination between my elementary school crush on Stephen Rossen and weekly trips with my dad to Decent Deli in Blue Ash. Saturday mornings were made for errand running, matzo ball soup, kosher pickles, potato pancakes and Dr. Brown's sodas.

Years later, I developed a respectful fascination with the Holocaust. Beginning in high school, I started reading literature related to that era, and even wrote a rather moving poem for my age about the tragic visions in my imagination about that tragedy.

I know I wasn't the only Gentile openly weeping when I went to Dachau at 17, but part of me didn't feel like I was Christian at all. I felt an unusual common bond with the people around me.

It wasn't faith though. I realize now it was respect for humanity.

Flash forward to today and more happy circumstances. Passover. It's a Jewish holiday that I won't even begin to explain because I know this Catholic girl won't do it justice.

The one thing I know about Passover that everyone can enjoy - Passover Coke. This sweet relief comes in the same bottles as the original counterpart but is made with real sugar, as opposed to the evil, obesity inducing high fructose corn syrup. 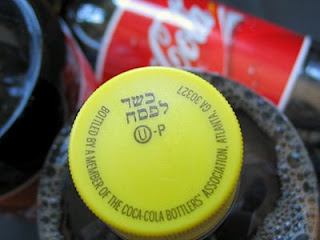 Passover Coke is traditionally marked by yellow caps that are stamped with an OU-P. This denotes the sugary sweet soda is kosher. High fructose corn syrup is normally kosher, except for during Passover, when Jews avoid most grains - including corn.

Coke tries to make everybody happy by selling a version sweetened with sugar.

"Praise Jesus!" the rest of us exclaim.

Coke with sugar tastes better than the HFCS version, and it is especially divine mixed with bourbon.

I am thinking about stockpiling enough Passover Coke to last me through UK's football season.

Now, I know what some of you are saying. "But, Kate. You can buy Mexican Coke all year 'round at the grocery. Why be like one of those freaky people getting ready for Armageddon, when you can just swing by for a bottle at whim?"

Well, yes. But Mexican Coke is sold in glass bottles, and carries a far higher price tag than its kosher counterpart.

And a sista is always looking for a bargain.

Kate's Random Musings by Kate the Great is licensed under a Creative Commons Attribution-Noncommercial-No Derivative Works 3.0 United States License.
at 7:30:00 AM

Woo! Love that you're reppin' the Passover Coke!

I was raised Catholic and even went to Catholic school for 8 years, but Judaism was where my heart is. I really love my connection to both faiths...it makes the holiday season (i.e. Pesach) all the more special and meaningful.

Looking for a bargain, sounds jewish to me.

One thing I have seen from the one Jewish girl I dated was that there is a greater sense of family (at times) during religious ceremonies. They were as dysfunctional as all get out at other times, but Seder and what not seemed very fun and Manishavitz...yum.

As a Catholic I've never understood the hatred of the jews by anybody. Most of the celebrated figures growing up were Jewish. Moses, Abraham, Noah, etc. Am I wrong?
So while I don't want to be Jewish, I do have a healthy respect for their people and especially their sense of national pride. In St. Louis I new a guy who was in the Israeli Defence Force, he was a very soft spoken guy but you knew he knew like 6 ways to kill you with a dradle.