Red Bull, "The Rules", and the Dalai Lama

My weekend was full of contrasts.

I went on a retreat to Lebanon, Kentucky to cast out all of my impurities (there are a lot of 'em) and fill myself with relaxation, renewal and rejuvenation.

All the while I was stressing over a looming first date.

I was to meet "match.com John" Sunday night, and the anticipation was anything but relaxing. That's not to say I wasn't looking forward to meeting him (because I was) but I always get nervous by these kinds of things... you know... Meeting a total stranger, putting yourself out there and trying to convince them your great without being a jackass.

I also was a bit nervous because I didn't want John to think I was odd for not drinking. I am very secure in my sobriety, but I am still having a tough time broaching the subject with strangers... I always worry they're going to think I used to be a lush who slurred my words and lost my inhibitions 24-7 before I dried up.

24-2 would probably be more accurate.

Anyway... I ordered my ol' standby Red Bull and Cranberry

to which there was no question, no curiosity, no nothin'.

Whew! Primary stresses minimized. My worries then turned to whether this guy was actually interested in me... or whether he took one look at me and decided not.

Dumb sucker if he did, but I don't think that's a problem. Twice upon leaving he mentioned that we needed to go out again soon. I kind of just dismissed the comments as a polite way to end the date, but his interest was confirmed the next morning... when he sent me a follow up email... at 7:45 A.M.

He basically said "Thanks again... I hope I impressed you... We'll definitely do it again soon..."

So that's a good sign, right (this is where you can hear the insecurity in my voice)?

Who the hell are these guys who says they like it when a girl asks them out? I've never met 'em.

Well anyway, my mom and sis long declared that I needed to get myself a copy of "The Rules." You know... it's the book that was all the rage a few years ago... telling chicks to not ask guys out, to not be prompt with phone call and email responses, and to basically be mysterious and a "creature unlike any other."

A part of me likes this strategy... because it's pretty obvious when a guy likes you: he asks you out. But another part of hates it only because I can't pursue any guy I'm interested in... I have to hang around like a wallflower until they ask me out.

So far I've done well following The Rules, and John seems to be responding, but we'll see.

***
I mentioned the retreat I went on prior to this nervewracking date, didn't I?

Well, it was really sweet. Some folks from my bible study went to a cabin owned by the mother of one of our friends. I was a little nervous before we went there... I'm not what you call a rustic chick. My idea of camping is a night at the Marriott (okay, that's a bit of an exaggeration... but not MUCH of one), so I was a little concerned about just how rugged this whole outing was gonna be.

Boy, was I all worked up for nothing.

We pulled up in the thick of darkness and a forest of trees to find an immense, incredible cabin. The whole thing was maybe 6000 square feet, complete with two beautiful full bathrooms, a hot tub and a kitchen Martha Stewart would envy (well at this point, just about anything would be better than prison.)

The front of the cabin was graced with a serene pond with a nice little dock and a campfire pit nearby. With the trees changing... showing off a spectacular show of color including ambers, crimsons, tobacco greens, gold and cinnamon, the place was a little slice of heaven hidden in Lebanon.

I thanked Laura for graciously letting us visit this serene spot and she mentioned how her mom got the place not just for family, but as a nice little retreat for church groups and priests and such. Laura then slipped in how the Dalai Lama once used the cabin as spot for his own little personal retreat. 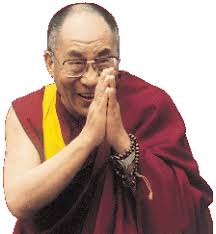 How cool is that? Hopefully a little bit of his Zen rubbed off on me (does he even believe in Zen?)
For all my meditation over the weekend, I still haven't found the answers for how to act on date two. I guess we'll find out when I get there.

Relax, the first one is the hardest, just do what you did before... be yourself.
If that doesn't impress him, does he deserve you ?
Being that yourself is the only one he should see in the first place.