This blog is woefully neglected, but I am going to attempt to redeem myself with some nice pictures, a few clever anecdotes, and a review of the best bar I've ever enjoyed.

Whew. That's a tall order, but I guess that's what happens when you go on a week-long blogging hiatus.

Monday I landed at National and made my way along the river to Old Town Alexandria, VA. Old Town is a cute little neighborhood very similar to Georgetown, but we'll get to that area a little later.

Here's a look at the hotel room at the Crowne Plaza - it was the first time I ever slept solo in a king sized bed. The bed was delicious, but I hated the foam pillows - I never got a good night's sleep.

Maybe I should have used the Sound Sleeping package you see on the bed in the picture - complete with a CD, ear plugs, an eye mask and lavender bedding spray. 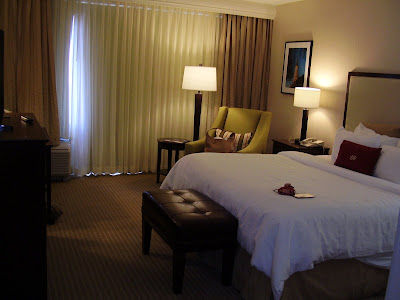 I left the hotel and headed for the national mall. I got off the metro at L'Enfant Plaza and walked a few blocks to a spot just a bit west of the Capitol. I found hoards of people walking the opposite direction -headed to a massive movie screen. The Washingtonians can catch a flick on the mall every Monday night - last week it was the classic Superman.

The nation does need a superman about now, doesn't it?

I continued walking west, headed for the Washington Monument. The entire time, the setting sun toyed with my retinas, forcing my line of sight to dodge the golden orange orb. I continued on until I made it to that alabaster symbol of independence.

I had to touch it. 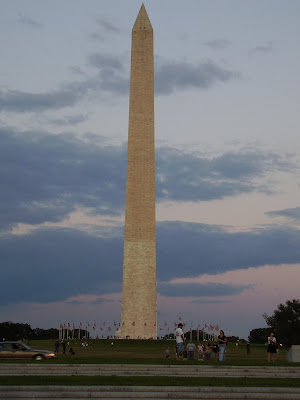 I put my sweaty hand on that cool stone and marveled at the history of the monument (including the massive delay in completion - hence the horizontal marking about a third of the way up).

I got a nice picture of the nearby Jefferson Memorial before heading to the World War II monument. 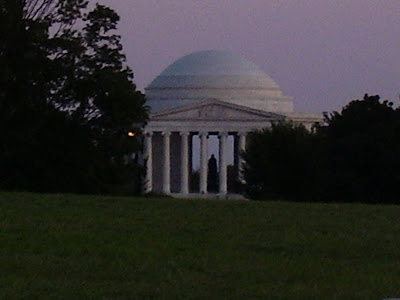 The WWII monument is the newest feature on the mall. It's a stunning haven for reflection and solitude, honoring the thousands of men and women who lost their lives while fighting for the world's freedom. Visitors are asked to be quiet and refrain from wading or throwing coins into the fountain. I didn't see a soul ignoring the request. 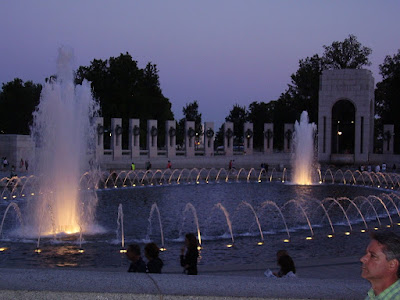 I made my way along the reflecting pool and was reminded of the summers of my youth in Minnesota. Why? Well, big bodies of water - whether they be shallow reflecting pools or deep, chilly lakes - are a welcome retreat for birds and mosquitoes. I saw several ducks floating around the water and swatted the mosquitoes and gnats the whole length of the pool. Should you visit, you will have to divide your time from staring at the surroundings and staring at your feet. 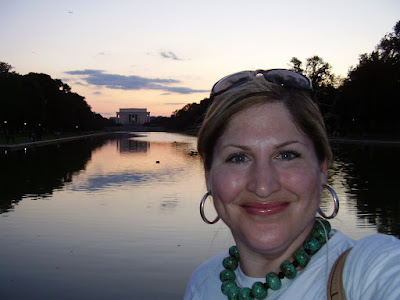 If you don't, you will most certainly end up stepping in bird crap.

I walked to the Lincoln Memorial, climbing up the 87 steps honoring the mention of four-score-and-seven-years-ago from the Gettysburg Address. I was surprised that many people were engaged in lively conversation despite the several prominent signs requesting peace and quiet. A very annoyed security guard was pleased I had given him a purpose to demonstrate authority when I asked him about the spot noting the location Dr. King gave his I Have A Dream Speech. If you are standing on the steps and looking at the Washington Monument, head to the left side, and you'll find an engraved piece of marble marking the spot that hosted history. 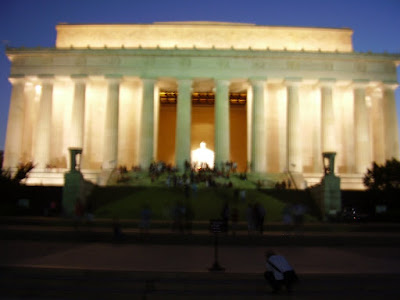 I got down on my knees and touched the letters in silence. My palms laid still as I reflected in awe at the true magnitude of those indelible words.

I took a cab to Georgetown and decided to grab a bite at Nick's Riverside Grill. The outdoor dining area is along the Potomac and looks on to the back side of the Kennedy Arts Center. I initially wanted to dine at Tony & Joe's, which was voted 2007 AOL Best Seafood in DC. The cab driver told me it wasn't as good as the seafood I could get on King Street in Old Town, so I decided to turn down the option that offered pricy dishes and a lack of seating options for a solo diner.

So I meandered to the nearby Nick's and ordered a big bowl of mussels prepared in a tomato and garlic sauce. It was quite different from the mussels I'm used to, steamed with white wine, garlic and butter. This tomato based sauce tasted kind of like it was equal purpose mussel sauce/pasta topping. I wasn't really enthused.

I did, however, enjoy the beer - a nice cold pint of Yuengling (pronounced ying ling). I had never had that lager before and was pleasantly surprised by the Pennsylvania brewed beer.

The server was not overly attentive and had the most sugary sweet voice - akin to Amy Adams in Enchanted. Every time she opened her mouth at my table or the three others in the immediate vicinity, I wanted to poke my eardrums out with a fireplace poker. Drastic, yes, but it would have been one way to relieve myself of that audible annoyance.

I paid my tab and asked the hostess whether I should walk the 20 minute walk to the Foggy Bottom metro stop or whether I should hail a cab. She said something about how it wasn't far but I'd have to walk under an overpass and so I decided to live dangerously and hit the pavement.

I'm a tough broad, after all, and have devised a personal safety maneuver that is sure to keep any unsavory types away.

I'm glad I walked, because I literally stumbled along a very prominent building in American history. 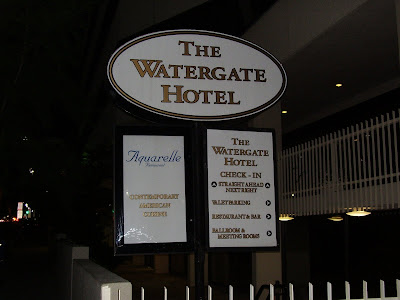 I waved goodbye to the ghosts of the past and decided to call it a night.

Tuesday some of my new conference friends and I ventured out to Georgetown with the thought that we wanted to hear some live blues music. We first grabbed a bite at Old Glory - a nice barbecue joint that features eight or so varieties of sauce right on the table. I was tickled but also surprised that I found a bottle called "Lexington" among the Memphis, Kansas City and other varieties honoring barbecue cities around the country.

Lexington is not really known for its barbecue. Hot Browns, maybe. Good beef, definitely. But barbecue? I don't think so. I deduced the folks at Old Glory named this vinegary sauce after my home away from home only because lots of people haven't heard of Owensboro.

I washed my shredded pork down with a local beer that escapes my mind.

My new friends and I cashed out and set out for Blues Alley - a back alley joint that the New York Times once billed as the best live jazz and blues in the nation. We stepped inside and quickly went back out the door when we discovered they were charging a $25 cover.

Instead, we walked a bit more around Georgetown before hitting Pennsylvania Avenue. The walking and conversation was infectious, and at one point we realized we were only a mile and a half away from the White House.

We walked and walked and walked until we could see the bright light glowing from the People's Home. My friends and I looked through the wrought iron fence while I wondered about whether the trees and bushes were bugged - surveying tourists for potential terror suspects.

We walked a few more blocks to take a spin through the lobby of the chi-chi Willard Intercontinental Hotel. We heard they had a bathroom there and we decided we'd give it a whirl (out of necessity). The restrooms had bidets but nobody felt the urge to have their bum washed.

We hopped on the Blue Line and made it back to the hotel with the big, big beds and uncomfortable pillows.

Next up - the best bar you've never been to.

Sounds like so much fun! Can't wait to hear about "the best bar."

I'd still love to go to DC. I went as a child but don't remember it. Oh, and by the way, that's a lovely picture of you. And I'm totally jealous of the necklace you are wearing in it. Gorgeous!

Great update Kate...loved reading about your trip. Your pictures look like they turned out great!

One little note: My guess is that the vinegary Barbeque sauce wasn't named for Lexington Kentucky. While it is a well known fact that I am a big fan of all things KY, I am afraid that style BBQ isn't ours. A vinegary BBQ sauce is reminicant of North Carolina and that sauce was probably named for Lexington, NC which is home to a great BBQ festival. I was surprised when I heard them talking about Lexington and BBQ on food network just the other night..until they tacked on the NC behind it.

Kate - Glad you enjoyed your trip. Having lived in DC for several years, it's nice to see it thru someone else's eyes. You get sort of jaded about the whole thing when you live there.
I remember, though, before I moved there and I was in town on business. I parked behind a beautiful (albeit enclosed) rose garden. I had no idea it was the White House rose garden until I walked back to my car. The White House sort of sneaks up on you, which is funny considering it's importance.

Glad you had fun!

Glad you had a good time. I'm heading there in October for a bloggie girl weekend - you should come!

DC is one of the most amazing cities in the U.S. I am glad you had such a great time. It's amazing how these buildings, filled with history, can really move you.

I've visited D.C. several times. As much as I despise the congress critters who reside there 10 months of the year, the scenery is worth taking in.