So There IS a Silver Lining To All This...

I got moved to a different newscast at my little hell hole TV station.

It's a switch that doesn't mean a whole lot to folks outside of the business... but to me it was a huge ego deflator. I still have a job, though, so it could be worse. And I'm not taking a pay cut.

I am instead moving from the station's flagship, top-dog newscast to the bastard show most folks at the station forget we even air. I am trading in the high pressure of the six o'clock news for the cruise-control attitude of the noon show. I am giving up my 10 hours of heart-pounding, hair-pulling madness, shouting and running, egos the size of Texas (no offense to the Lone Star State) and crime-crime-crime for 8 hours of less management, calm voices and happy stories about luxury Christmas catalogs and junior firefighter press conferences (and an anchor who is a real professional, and an even more real person, if you know what I mean). 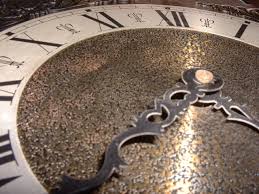 for one that starts at the ass crack of dawn (okay, really 6:30 am) but with the upswing of a day that ends somewhere between 2 and 2:30 pm.

And this is a bad thing because why?

I know, I know. It sounds like a no-brainer. The TV business totally sucks, and for months I've been entertaining the possibility of getting the fuck (yes, I said fuck) out of the field. It's a blood-sucking industry that demands people to perform exceptionally well under tight deadlines every day, with no appreciation or adequate compensation. Many a journalist has had to file bankruptcy or survive on generic canned tuna to stay afloat, and as enticing as both of those options sound, I think I'm more interested in door number 3 (hello, Monty Hall). Which is why I am embracing the new assignment. This schedule will give me a chance to start applying for jobs or scheduling interviews in the afternoon. I can go tanning or to the gym in the afternoons (just like all those gym bunnies I purportedly hate). I will be able to escape the perils of my little, crumbling newsroom just as tensions are about to hit a fever pitch (at the dreaded 2:30 editorial meeting... where big egos are further inflated, and the worker bees are consistently taken down a notch or ten).

A good friend of mine tells me it sounds to her like I just got a pay raise. For years I've been pulling 50 hour weeks at 40 hour pay. Now I'm scaling back my hours by at least 10 hours a week... that's a pay raise in Lady M's book.

My mother says this is exactly the kick in the pants I needed. I am notorious for doing things last minute, job searches included. My body will probably be late to my very own funeral.

Anyway... this little career correction is going to be the inspiration I've needed to really start the all out search before my contract expires (February 25th, for anyone who's asking). I decided months ago that it was time for me to explore other options: the enchantment of television news has worn off for me. Every member of the media makes so many sacrifices to do the job they do, the sacrifices asked of me were far too great, and had come to seriously diminish my quality of life. At least now I have the flexibility to start looking around before my time is up. I am pushing hard to find a job in Marketing or Public Relations... something that would take advantage of my diverse writing skills (and you thought I was only good for blogging!) Who knows... maybe I'll take a class or two at the Greatest University in the World and end up getting my masters in something. The world is my oyster to discover and savor!

The greatest silver lining of all is how much this experience has drawn a line in the sand regarding my priorities. My demotion (if you can call it that: my title is staying the same) has led me to discover just how important it is for me to some day to get married and have a family. This is no casual desire... a plan to keep up with everyone else in my age group. Rather, it's a deeply ingrained hunger, a yearning to be an active part of a thriving family.

And from the looks of it, families do not thrive when Mom or Dad are in the media.

Sure, there are exceptions to the rule. But by in large most of the folks who come up the pike in television news either are childless, or they have the kind of family life that's fodder for a Lifetime movie.

Examples:
My first news director was a gay man. I'm down with the rainbow power, but chances are he's not planning on setting up a baby nursery any time soon.

My second news director left a manifesto on his office door upon his being fired. The main thread in that diatribe is this: the old guy wanted to find a career that would appreciate his efforts more and afford him more time with his wife and kids.

My third news director has a wonderful heart, but she was a single woman in her later 40s with an unstable son.

Our interim newsroom management consists of a single 45-year-old woman with no kids, and a mid 30s guy with no kids.

A decision to stay with television news would cement my destiny firmly in a future of loneliness and solitude. No kids to look forward to (well except maybe the kid who delivers the Sunday paper) and no companion with whom to spend my Golden Years.

My little ego check has hurt my pride, but it's done wonders for the outlook of my future.

K.T.G.
Sounds to me like you have been PROMOTED to a better more relaxed position.
Though I know nothing about the media business, I do know something about a more relaxed enviornment.
Coming up the world of the factory rat, I had applied myself to the skilled trades, busted my ass for the first 5 years of training, busted my ass for the next 15 years of doing everything I could to provide the quality and workmanship everyone deserves from the product being made, from aerospace products to automotive and so on.
Now, I work for one of the "big three" and the pace is so much slower than the jobs shops because of the lines of demarkation between the trades. (you can't step on any toes here).
It is strange to me to have to actually slow the pace, but I am getting used to it.
I do enjoy more of a family life with my wife and children, ( and a very active granddaughter ).
So what am I saying ??
Relax and enjoy the ride, your still young.
Good luck.

I've got a friend here in the Nashville area who does radio and, man, that business is cut throat and almost incestous--at least in terms of hiring. Surf over to my blog and visit the link for NashvilleRadio Blog to read all about some of it. He does news and traffic for a bunch of stations and has to get up at 3 a.m. to start things.

I'm there with you on a lot of things. In my search for meaningful employment, I am considering going back to school as well. My question is--what the hell do I want to do with the rest of my life?

Also, I know beyond any shadow of a doubt I wanna get married and have kids someday. For a long time, I waffled on the whole kids thing. Then, a near tragedy happened to my baby sister, and it was brought home to me that, yes, I wanted kids of my very own. Doesn't matter if once I find that speical person if we have 'em naturally or adopt, but that they're our kids and we love 'em. (I'm all about adoption since without it I don't have my neice and nephew and I cannot imagine life without them). So, I just know that I want all that...and I feel like I'm in this insane holding pattern right now...frustrated by a lot of things, but keeping on fighting because, well, I know that dreams don't come true without some hard work.

Yes, Kate, Life is too short. There are many people who will appreciate you and many others who won't. There are jobs that will keep you begging for more, and those that you once enjoyed but eventually outgrow. Choose to find an environment that inspires you and keeps you excited about your work and the people you will see there.

You are DEFINITELY doing the right thing looking for new options. I am so excited for you, I can hardly wait to see how it all works out.