The Food and Drink of Great Britain

London is a veritable Around The World game spread out across the city, with all kinds of world delicacies ready for your enjoyment. 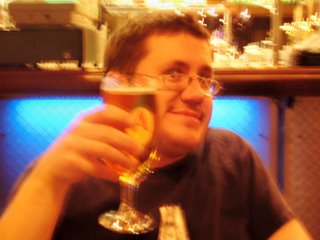 Southern Son enjoys a Greek beer at Souvlaki and Bar

Forget what you've heard, the food in England is pretty damn good. Even the pies and puddings and assortment of potatoes featured on menus showcasing authentic British food are pretty good.

D Money tried a beef and ale pie at Punch and Judy's at Covent Garden, and I'd say it pretty much tasted like the Marie Callender's pot pie I got on sale for two bucks a couple weeks ago at Kroger. Which translates to a good rating in my book. Even the mashed peas (I don't understand why you just can't serve them in their original, "prepackaged" spherical form, but whatever) were alright.

Southern Son and I went to a really great fish and chips shop near Baker Street - The Seashell - and I had fried haddock. Excellent batter - not too doughy. Just the lightest, flaky flavorful cover for an excellent piece of fish. The chips were great, too. Very potatoey. Not like those skinny straw things that the Mickey Ds dish out back home.

I also briefly discussed the Indian food we at at Ram's in Kenton. A symphony of foreign spices and foods that were both pleasing to the eyes and taste buds.

That's not to say I escaped the UK without eating anything weird.

A previous post mentions the the haggis I chowed down on in Scotland. Somehow I failed to mention the black pudding I had for breakfast last Wednesday.

I can't believe I forgot to mention the black pudding.

Our hotel served up a complete, authentic Scottish breakfast, and I decided to try everything "foreign," including the said, mysterious black pudding.

It tasted alright. Meaty would be one word I'd use to describe the black pudding. It kind of tasted like the haggis (which is a lot like Cincinnati's goetta) but it seemed like it was missing some of the oatmeal.

Why, oh, why did I look up what black pudding was when I came back to the States?

I knew I should have let well enough alone, but I had to know. What was that strange piece of food that I ingested merely five days earlier?

I can't believe I am even going to write this following statement out, considering my mouth is currently full of Halloween candy.

Warning: do not continue reading if you are eating, have a weak stomach, or hate anything remotely similar to Fear Factor.

Looking back on it, this black pudding was by far the most disgusting thing I've ever expected my body to digest and process into waste. Even more disgusting than the cicada I ate to impress a former boyfriend.

I knew the black pudding was sketchy. I ate it anyway, not wanting to know what it was until long after it was digested.

The weird thing is, it really didn't taste bad - and who knows, I might even be willing to try it again.

Email ThisBlogThis!Share to TwitterShare to FacebookShare to Pinterest
Labels: food and drink, vacation

I think I would give the haggis a try, but I am unsure about blood pudding. Who is the first guy to do that anyway? It had to be a dare. Then again, I bet I would probably eat it with ketchup.

I'll try anything once.