London Town: It's All Good

Everything goes where fashion's concerned. 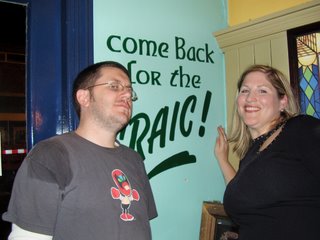 London is the kind of place where you could dig out all those old stirrup pants and t-shirts cinched with a buckle at the waist - and no one would give you a second look.

People were wearing all kinds of junk that I would normally feel embarrassed to drop off at the Salvation Army. Really, anything goes. Anything.

And despite previous misconceptions, Londoners are rocking jeans hardcore. No matter where I went - restaurants, clubs and airports (for a wide cross section of examples) the 15-to-50 set are all wearing their favorite Sevens or Levis or Old Navys.

In regards to other ambitious fashion moves - there are leggings under mini skirts, flat boots, boots that come well above the knee (some of which reminded me of Peter Pan). The hairstyles are just about as diverse - all kinds of colors, curls, braids, hair bands, scarves, you name it. It all goes. Seriously.

The children look equally unusual. On more than one occasion, I would notice a little one dressed in some unusually printed dress with leggings that appeared to be government issue, and I would think to myself So many of these kids look like they just stepped out of a Russian gulag. With their generic flower/japanimation/abstract printed clothing (whether it be tops or pants or coats or purses or whatever), it looked like these kids just fell out of a 1992 trailer park in East Berlin.

Wait, did 1992 East Berlin even have trailer parks?

That's the other thing about London, and perhaps Europe in general. No brand names. No "Roccawear" splashed across the sweatshirt. No polo ponies, no Coach Cs anywhere. London appears to be a place that has practically banned the conspicuous branding that Americans have so fallen in love with. I can't even be sure I saw the famous "LV" logo that covers so many coveted purses in the States.

It's shocking to think how eclectic the fashions are in such a fashion forward city as London. So many of the unusual, envelope pressing selections would elicit dirty looks and hushed whispers in any Cincinnati club bathroom.

And I suppose that's one reason why I love big cities. The people there roll with unconventionalism. No matter the city - Chicago, Seattle, New York, Tokyo: a wide convergence of people leads to more acceptance and a fostering of unique ideas.
at 6:33:00 AM

did kevin vomit on his shirt?

Jeregano - I don't think the guys whisper in the bathroom quite the way the girls do...

D- Yeah, I don't know what's up with that. Was he stuck under some giant's armpit? Did he drool all over his Harrow Harem? Does he void his bladder through his shoulder?

Please have a wonderful (and safe) time in Tourin.