I was all set to rip off a post about empowerment and feeling comfortable and happy in my own skin. This comes after an epiphany this weekend that I am damn satisfied experiencing the life that is mine, single or not, and that if I'm meant to be married and with children - then it will happen when it's supposed to.

But in the mean time I'm enjoying everything that life is blessing me with, because right now my life is really rocking, and I'm loving every minute of it.

And then I was hit with a whammy that pretty much sucked the air right out of me.

I found out a former co-worker of mine just passed away after a battle with brain cancer. 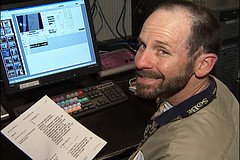 This man was a photographer at my former television station. 48 years young and the picture of health. Duane was perhaps the most physically fit of all my co-workers at WTVQ. He was always busy riding his bicycle or playing disc golf, and I got the impression that everything he ate was uber-healthy.

Duane was also one of the most laid back people I've known in the television business. The epitome of California Cool, which is where Duane called home.

In an industry that is based on frenetic energy and irrational, split-second decision making, Duane was one of the people in the newsroom who would aptly put things in perspective. We weren't in the business of saving lives, we were in the business of moving pictures and talking heads. In sea of hot-headed managers, a revolving door of reporters and a cavalcade of inexperienced producers (including yours truly), Duane was a member of the brotherhood of photographers who offered stability, knowledge and peace in a manic newsroom. The rotation of key players never changed, they rarely got all hot and bothered about what we wanted them to do.

That doesn't mean Duane was perfect.

Sometimes he didn't like shooting what I asked him to cover. He wasn't always a big fan of doing live shots for my 6 pm newscast and he also wasn't the first to jump at covering breaking news.

But Duane was such a nice guy that I never really held it against him.

And I guess that's what people remember about us when we're gone. They don't remember whether we wrote dynamite VOSOTs or whether we were the first on the scene to shoot the house fire.

And Duane was a King of Kindness.

Always there for a smile. Always ready for a toss of the frisbee in the back lot. Always toting his bike around for the next ride.

Ride on, Duane. Thanks for the calm.

That was Duane....he will be missed.

I'm sorry for Duane and any family that he had.

That's the universe for you. When you have your happy mood set to "cruise" it likes to throw you a curve just so you don't think you're in charge.